Please Don't Rain Down on Us in Verden! 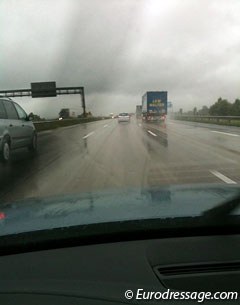 The early bird catches the worm, but this bird was really not ready to jump out of her nest at 3.45 AM for the trip to Verden, Germany. Though my intentions were good to go to bed early on Wednesday evening, my plan failed miserably once again. I was waiting for pictures to arrive, which didn't, and just kept lingering packing my suitcase, computer and cameras.

All of a sudden any TV-program seemed interesting enough to stay awake for. I saw a re-run of Project Runway, an episode I had already seen, but surprisingly the dressers and designers seemed all new to me and it was fascinating again. At 11 PM I made my way to bed but couldn't help myself and flipedp on the TV, again. Wow, "Restaurant Makeover".. never seen that one before. Everything was better than going to bed early. The program dragged on forever and I did feel myself get tired, but I was also persistent in watching the makeover of the Italian restaurant as I HAD to see what the interior decorator had done to the place. It was 0h10 when the new design was revealed. Ugh. I stayed up too late and this will avange itself tomorrow evening.

Knowing you have to get up early to be somewhere on time triggers my nerves. I woke up at 3 AM because the cat was meowing in front of the screened window. Even the dog got up to have a look. 45 minutes more to sleep. I made an effort but that didn't really work so I got up at 3.40 AM. All my stuff was packed so I only had to upload a couple of prepped stories for other early birds around the world who wanted to read the new updates on Eurodressage.

I had been vehemently following the German weather forecast the past few days and the messages were ominous. Rain, rain, rain, dark clouds, showers, and very nice 25° temperatures. I must admit, I think I'm suffering from Post Traumatic Stress Disorder (PTSD) after surviving Mudholm (= the 2011 European JR YR Championships in Broholm which became a mudfestival after three days of torrential rain). The drive up north direction Bremen went super smooth: little traffic and though the sky was heavily overcast, it was dry.

I enjoyed myself listening to my favourite radio station in Germany, BSBF (British Air Force station) and revelled in the weather forecast of Kandahar (45 °C). I learnt how to deal with heath sickness and was urged never to ignore mental illness, which is as genuine a disease as getting injured in war (according to the station).

And then it happened. My hope for a dry show got washed away in between Osnabruck and Bremen when rain flooded the motorway. I wanted to take a photo of how hard the rain was coming down, but I had to hold the steering wheel with two hands to prevent my car from aqua-planing.  No No NO NOOOOOOOOOO!!!!!

Fortunately as soon as I took the A1 exit to drive onto the A27 the weather cleared, it became dry and still is right now at the show grounds. I'm crossing toes and fingers that those devillish clouds I met en route are not heading here!

The 5-year old preliminary test starts at 9 AM.