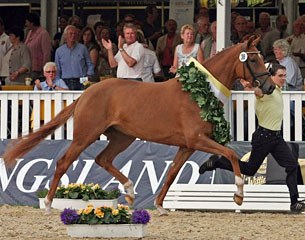 While the young dressage horses had their first training day and vet check, the best Hanoverian bred 3-year olds assembled on the show ground for the Championship. A crowd of 2,000 breeding fanatics gathered to watch the mares present themselves.. The show started at 10 AM in the morning and in the late afternoon the dressage, show jumping and half blood champion mares were proclaimed.

Delany led the pack of sixty-six 3-year olds and stood out with her elasticity, power and happy presentation. Bred by Wilhelm Schwierking, Delany was praised by selectors Holger Schmezer, Werner Schade and Hartmut Wilking, for her cadence and looseness. "I really wish she will go into the sport," Schmezer commented.

The reserve champion was Lady Dance (by Londontime x Wolkentanz), bred by Monika Rosemeier-Harms and owned by Monika Ahlers. Her excellent trotwork made the audience applaud spontaneously.