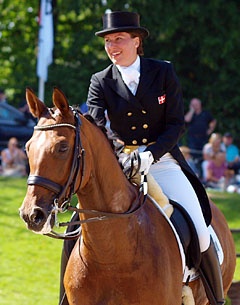 The Danish Equestrian Federation was able to announce the combinations which have been selected to represent Denmark at the 2011 European Dressage Championships in Rotterdam, The Netherlands, on 17 - 21 August 2011.

Based on the results this show season as well as the final Danish selection trial at the national championships in Broholm this weekend, the selectors nominated the following team:

The European Championships are an important qualifier for team Denmark for the 2012 Olympic Games. As The Netherlands, Germany and Great Britain have already qualified as nations, the other top three ranking teams will earn a ticket to London.

"We are going for an Olympic qualification at the Europeans," said Danish team trainer Rudolf Zeilinger. "I'm sure the team can achieve this. Denmark is a strong dressage nation, which we already proved at the last Olympics, where we took home bronze."

Three riders have also been selected for the Under 25 competition in Rotterdam. They are Anna Kasprzak on her own Donna Fetti, Daniel Bachmann Andersen on Silvia Rizzo's Donna Silver and Sofie Jeppesen on her own Hedebo's First As.