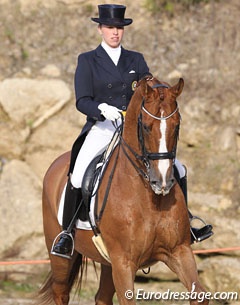 The Portuguese Equestrian Federation (FEP) has announced the names of the riders which have been selected on the Portuguese team for the 2011 European Dressage Championships in Rotterdam (NED) on 17 - 21 August 2011. The Portuguese team selection was very controversial as two team members were deliberately ignored and denied a position. Both are undertaking legal action against their federation.

One of the strongest Portuguese riders, Mafalda Galiza Mendes with D'Artagnan, has been denied her spot because she did not participate in the last selection trial (CDI Pompadour). Galiza Mendes had a more than valuable reason not to ride at the final trial as this 3rd-year veterinary student had final exams during Pompadour.  This former young rider was the best Portuguese rider at the 2010 World Equestrian Games 2010 and is currently 78th on the FEI Dressage Riders' Rankings. The FEP reacted that has the statute of "high competition athlete" and her exam schedule is organized in concordance with the CDI calendar.

"Since the list of Portuguese riders for Rotterdam is now final and has been confirmed by the Federação Equestre Portuguesa, I am now able to voice my feelings on the controversial selection procedure by our national Chef d'Equipe, Carlos Lopes," says Mafalda. "The CDI in Pompadour was barely publicized as a necessary qualifier" and because the 20 year old had her veterinary exams to attend on the same date, was ufortunately unable to attend the competition. "I have thus been severely and unfairly excluded from the team by Carlos Lopes." Naturally very distressed over her unfair treatment, Mafalda cannot find a just explanation for this action, other than say that "personal issues, lobbies, and lack of fair play, have played a very important part in the selection procedure for this year's Euro championships."

German based Nuno Palma e Santos and his Lusitano stallion Sal have also been refused a team spot. He was last year's reserve rider for the 2010 World Equestrian Games but decided not to make the trip last minute when Maria Caetano's Util passed away unexpectedly. For unspecified reasons he also did not make the journey to Pompadour.

For 2011 national selector Carlos Lopes riders who wanted to be considered on the team had to fulfil the FEI requirements during a period between 1 December 2010 and 19 July 2011 at three CDI 3-star events. All riders were also obliged to compete at the CDI Pompadour, after which Lopes would announce the definite team. Both Galiza Mendes and Palma e Santos fulfilled the FEI requirements, but were not able to attend Pompadour.

The FEP proposed to do a final observation trial in Verden to comply with the riders, but Palma's Sal is now in Portugal breeding mares and most likely will not be ready for the show. Disappointed in the lack of fair-play, Galiza Mendes has now opted to ride in Rotterdam's Under 25 competition.

Portuguese dressage fans are totally puzzled by the fact that the Federation only sends a team of 3 when five riders have met with the official FEI requirement. If one of these three horses goes lame, there will be no team for Portugal.

"As you can imagine, as chef d’equipe, i preferred to have four in a team than three," selector Carlos Lopes told Eurodressage. "In order to have a full idea of the situation, I will send you an article with the point of view of the Federation and Dressage Association." Unfortunately this official statement from the FEP did not materialize before the announced publication deadline of this article.

Galiza Mendes and Palma's lawyer both have lodged an appeal with the arbitration committee of the National Federation as well as with the FEI.