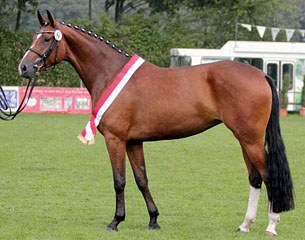 The 3-year old bay mare Florenciana F was proclaimed Westfalian Elite Mare Champion at the 2011 Westfalian Mare Championships in Munster-Handorf on 26 July 2011. Eighty-two mares were selected to participate at this breed show.

Markus Schulze-Finkenbrink is the breeder and owner of Florenciana F, who is by Florenciano out of Verband premium mare Nora (by Newcastle).

The third placed mare was Fashion Girl, a bay 3)year old by Fidertanz out of Madeleine (by Munchhausen). She is bred and owned by Karl-August Schulte-Varendorff.