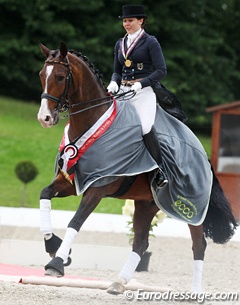 FEI Press release -- German riders had it almost all their own way when claiming both the Young Rider and Junior team titles as well as three of the individual gold medals on offer at the FEI European Dressage Championships for Young Riders and Juniors 2011 at Broholm Castle in Denmark this weekend.  But the host nation did themselves proud when finishing a close second in both team events and then coming out on top in today's Junior Freestyle Championship won by Nanna Skodborg Merrald and Millibar.

For Germany's Sanneke Rothenberger these championships have been a particular triumph, as the 18 year old daughter of Olympians Sven and Gonnelien Rothenberger continues an ever-upward trajectory in her already impressive career.  She won team gold as a Pony rider, and in 2007 made history in the German Youth Riders Championship when clinching silver in both the Pony and Junior divisions.  She won team and individual gold at the FEI European Junior Championships in 2009 and last year claimed team gold and individual silver at Young Rider level.  This weekend, with her 10 year old Oldenburg gelding Deveraux which she has been competing for the last four years, she stepped up her game even further when taking Young Rider Team, Individual and Freestyle gold, firmly placing herself at the forefront of her sport and displaying an awesome talent in the making.

HRH Princess Benedikte of Denmark, the dedicated and active patroness of the Danish Equestrian Federation, attended the event and today the FEI President, HRH Princess Haya, was also at Broholm Castle to present the medals to the winning riders. It has been a testing few days in every respect, as the weather did all it could to disrupt this year's fixture with pouring rain and high winds creating a less-than-perfect competition environment.  But the next generation of top-class dressage competitors rode through it with determination and emerged triumphant in the end.

The German Junior team of Pia-Katharina Voigtlander (Laetitian R), Vivien Niemann (Cipollini), Jonas Schmitz-Heinen (Der Daimler) and Lena Schutte (Eloy) had a six-point advantage over the Danish side while, once again, the Dutch claimed the bronze.

German Chef d'Equipe, Maria Schierholter-Otto said "the riders on the Junior team are all new and haven't got any experience in this kind of international championship, but all of them have good horses and they learned a lot during the past few months.  With the Young Riders we were more experienced, although Charlott-Maria Schurmann is on a new horse after the one she had last year was sold to Denmark.  This start for us of course is very fine, and I'm sure that the next few days will bring a lot more good sport and fair riding" she added.

Danish Chef d'Equipe, Hans Christian Mathiesen, was well-pleased with the performances of his side too.  "They performed super today" he said.  "They showed confident riding and were well-prepared for this competition. I think the fact that we are already in close contact with the riders when they are competing in the Pony division makes the difference and has turned them into silver medallists today.  Only Rikke Bollingtoft has competed previously in a Young Rider FEI European Championship.   The rest are making their debut in the Young Rider team at a European Championship, so their performance is impressive" he explained.

Dutch Chef d'Equipe Tineke Bartels was a little disappointed about the mistakes that cost his team the silver medals.  "We are happy to be on the podium, but honestly we thought we could do better today.  The Junior team is usually stronger.  We knew it was difficult in the Young Rider competition but we got some experience that will make us better next time.  I am confident that the riders will use this to get even more motivated for the individual competitions.  And the Danes really earned it today - I'm very happy for them" he pointed out.

The Danes were really into their stride by now and in Saturday's Young Riders Individual championship filled both silver and bronze medal positions behind Rothenberger and Devereaux, the horse which won the 2007 FEI World Championship for Young Dressage Horses at Verden.  The performance of Denmark's silver medallist Cathrine Dufour was all the more remarkable for the fact that her horse, Atterupgaards Cassidy, is only an eight-year-old which was called up when her top ride was injured two months ago.  Dufour was second-last to go, but the pressure didn't seem to bother her as she racked up a score of 74.079 which left her only 0.263 behind Rothenberger's winning tally. And she was delighted with the result.  "It didn't even cross my mind that there would be a chance for a medal at this championship - it's unbelievable, crazy - totally crazy!" she said.  "Two weeks ago I wasn't sure that I wanted to compete because Cassidy wasn't my first choice - but of course I'm happy now!" she exclaimed with a big smile.

Before she entered the arena, Dufour's team-mate Carina Nevermann Torup and Blue Boy held the lead until Rothenberger swept out in front. "I was focused and not nervous at all, unlike my mother who is also my trainer!" said Carina.  "I wanted to do better than on Thursday, and we did.  I had good preparation at the Nordic Championship three weeks ago so I knew we were on the right track.  I am so happy because this is my last year and a Young Rider and it's a good result to finish my career with" he added.

Rothenberger said her parents were also nervous ahead of this competition "though I felt very secure about my plan" she explained.  And that plan was "to improve my test from the team competition and I did, although I think I could have done it even better!".

The Danes took their third medal of the day when Anna Zibrandtsen steered Capriciella to take bronze in the Junior Individual Championship in which Germany's Pia-Katharina Vogitlander (Laetitian R) took silver and Vivien Niemann (Cipollini) claimed the gold.  Niemann used to be a jumping rider but now her heart belongs to dressage and she was one of many to comment on the weather conditions that prevailed throughout the championships.  "It's the same for for everyone and we are used to competing in all kinds of weather - that's also a part of the sport" she said.

Niemann finished just outside the medals in the Junior Freestyle today however in which Nanna Skodborg Merrald and Millibar, equal-fourth yesterday, rose to the challenge to take gold ahead of Voigtlander in silver and Zibrandtsen in bronze.  And for Rothenberger there was one final golden moment as Devereaux continued his incredible run of form to achieve a score of 76.075 to clinch the Young Rider Freestyle title ahead of German team-mates Annabel Frenzen and Cristobal while Dufour returned the podium once more, this time taking bronze for Denmark.

Back to the 2011 European JR YR Championships