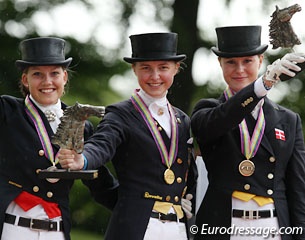 German Sanneke Rothenberger reigned in the individual test at the 2011 European Young Riders Championships in Broholm, Denmark, on Saturday 23 July 2011. Aboard her 10-year old Oldenburg gelding Sanneke finished first and earned the individual test gold medal. She was flanked on the podium by two Danish girls, Cathrine Dufour on silver and Carina Nevermann Torup on bronze.

The individual test competition could be described as very interesting, to say the least. The field of 59 competitors was split into two groups based on a reverse order from the team test. The half with the "lowest" scoring riders competed on Friday in horrible weather conditions. It poured all day long and even though the footing stayed perfect, the wetness and dreariness got caught  of everyone's mood, including the judges who scored extremely strictly. The winning score of the day was a mere 63.105%.

The second group rode on Saturday morning and conditions had improved slightly. It was no longer pouring but the drizzle became equally annoying as a strong wind blew all day. The mud level on the show grounds, however, reached unprecedented depths and was reminiscent of Woodstock 1969. Fortunately the horses and riders braved this autumn weather in the middle of the summer and did not seem too much affected by it.

"There has been some crazy weather in Denmark the past two weeks," Danish rider Nevermann Torup said. "Rats have even been coming up the sewers in Copenhagen."

Rothenberger Gets the Gold 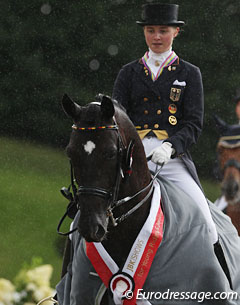 Sanneke Rothenberger and her gorgeous black gelding Deveraux OLD got the gold for their 74.342% earning ride. The pair got their highest notes for the outstanding trot work, which showed much balance and elegance in the front leg. The extensions were big and the horse was excellently bent on the voltes. In the collected walk, the black gelding got quite short but the extended was ground covering and clear. Rothenberger rides as precise as a Swiss watch and in the canter she executed correct, straight tempi changes. Deveraux lacked some roundness and forwardness, which showed in the slight loss of impulsion before the right pirouette, but he was obedient and constant in the frame.

Rothenberger was very pleased with her first individual young riders' gold medal. "I  can't really believe that I won," she admitted. "In the first test I made some mistakes and knew it could be better. My mom said it also, so we had to do better." The Bad Homburg based rider confirmed that she gets the most points for the trot. "All three gaits are good but the trot is his best. You just sit there and you're flying. In the walk I just try to relax so that he thinks he's at home."

Sanneke explained that she had no problems with the weather conditions. "He doesn't get scared from the weather, no matter if it is cold, windy or rainy. He's weather proof," she said.

Rothenberger confessed that her preparation for the individual test was not ideal though. " My parents were the most nervous people today because nothing worked before the test. I was late, I hadn't even cantered when Louisa went in (Luttgen, the rider before her) . We don't have to do much before a test. We know each other. It was good today but it can be better."

Cathrine Dufour Returns to the Podium for more Silver

Danish Cathrine Dufour was last year's double silver medal winning junior rider, but she totally did not expect to repeat that feat at young rider's level this year. Trained by Rune Willum, Dufour had actually planned on competing her more experienced PSG horse Aithon at the Europeans but when he got injured two months ago, Cathrine called her greener 8-year old Atterupgaards Cassidy (by Caprimond x Donnerhall) to duty. 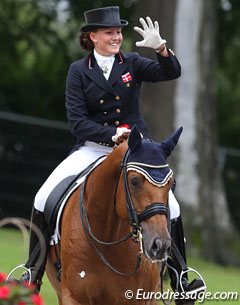 The compact chestnut gelding is an outstanding mover with much freedom in the shoulder and bounces off the ground in trot. He started out the test a bit tentatively, searching to find the right length in the stride and gradually became more regular in the fantastic trot work. The extended walk was ridden with much energy and forwardness. The collected walk was crystal clear in rhythm. The four tempi's were correct but could have covered more ground, the three's were super but Dufour's diagonal curved a bit. The extended canter was fantastic and the pirouettes solid. She scored an impressive 74.079% and was right on Rothenberger's heels.

"It's just amazing," said a beaming Dufour. "Two weeks ago I thought we shouldn't go to the Europeans. Cassidy wasn't ready but today he was with me. It worked. We've only ridden at young riders' level for six months."

Dufour's half-Trakehner bred Cassidy is quite a hot horse and gets over-eager to perform. "I didn't push him hard on the warm up," Dufour explained as her preparation for today's test. "On Thursday I pushed too much and he got hot in canter. Now I was relaxed in the trot and then the canter flows"

When asked what she hopes to improve for freestyle, Dufour replied frankly, "it's crazy to talk about improvement. I just hope to keep him calm and relaxed in the main arena. I just hope my music will fit and that I can keep him calm. 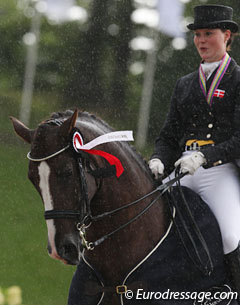 Nevermann Torup  had an excellent ride with her liver chestnut gelding. The trot was nice, constant, quiet and rhythmical. The gelding was balanced throughout the test. The extended walk was ground covering, but in the collected he struggled a bit with the rhythm. The entire canter tour was extremely correct. The horse showed solid changes and good sit in the pirouettes. It all could have been a little bit more expressive and fresh, but the accuracy of her ride was amazing. She scored 73.342%.

"I'm very surprised. I was in total shock when the last rider finished the test," said Nevermann Torup at the press conference. The Dane couldn't wipe the smile off her face. "It's fantastic. I didn't expect it at all.  I just focussed on doing a good test. On Thursday Blue Boy got a bit tired in the canter and now I was hoping he would last all the test. He was there for me today. The test is made for him. The trot work fits him so well. I like it more than the Prix St Georges."

Nevermann Torup discovered Blue Boy as a 5-year old and trained him all the way up the FEI level herself. Two years ago he got severely injured and had to operated on his leg. It was a close call back then whether to euthanize him or not. The Torup family did not and Blue Boy made a remarkable recovery. "It's funny that he's even here today," she explained. "I have a special bond with him." 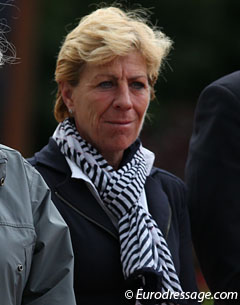 Judge at C Francis Verbeek was very pleased with the high level of quality riding in the Young Riders individual test, especially with the second half on Saturday

"Yesterday the level was not very high; maybe it comes from the reverse order draw," O-judge Verbeek explained.  "One way it's nice, but not so for the riders and organizers because it can be boring. The weather and the level were not so good. They came from far countries and nobody was watching. I feel sorry for them. The last group today was very good, the last ones were really fighting. For us as judges that is fun. We've seen some super horses and technically some very good riding."