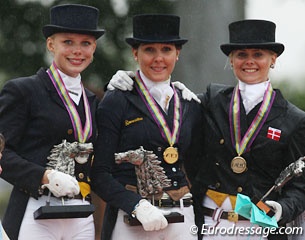 Fifteen year old Vivien Niemann clutched the gold medal in the junior riders individual test at the 2011 European Junior Riders Championships held at Broholm Castle in Gudme, Denmark, on Saturday 23 July 2011. As one of the youngest riders at the show, NIemann was unbeatable in the class and earned the gold with a score that ranked her 2,3% ahead of silver medallist Pia Katharina Voigtlander. Danish shooting star Anna Zibrandtsen virtually came out of nowhere to end up with bronze.

Aboard the 9-year old Hanoverian gelding Cipollini (by Compliment x Western Star), Niemann visibly worked hard on her horse to show off his light-footed, engaged trot work. The bay gelding had much self carriage in the voltes and maintained a very steady cadence. Only when she had to do the sitting trot on the half circle with long reins, the horse lost most of his expression and looked normal. As soon as she picked up the reins again he was bouncing off the ground. She kept the collected walk well under control and in the extended Cipollini covered ground. The flying changes were uphill and straight. Only the simple change was quite abrupt. Niemann finished her test with a wonderful extended canter. She scored a staggering 75.158%. 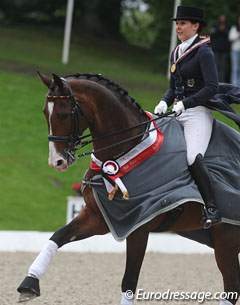 Niemann was shocked to have won the gold and praised her horse for the accomplishment. "He really wanted to work. I had to hold him back. It was so great to ride him today." The horrible weather with rain and a strong wind didn't make it easy to have a flawless ride. "It was more difficult for me," she explained. "He was watching the flowers move in the wind and when rain got in his ear he shook his head. It was difficult to ride today but it is like it is. We all handled it very well."

The Walldorf based Niemann is trained by her parents Christoph and Ilona. Vivien admitted that not she but her parents are the most nervous at shows. "They are nervous when I go into the ring but they are trying to hide it," she confessed. "They are so happy when it worked out well. Mom and dad were almost crying."

Her lovely Cipollini came to her as a 6-year old. The Hanoverian is bred by O-judge Dieter Schüle and was quite difficult at the start. Now he fits the junior rider perfectly.

After having won the team championship test and team gold on Thursday, the 17-year old German Pia Katharina Voigtlander went into the ring with a mission for gold. Aboard her  10-year old Bavarian bred Laetitian (by Lord Loxley x Cartier) she ended up with silver on a score of 72.579%. 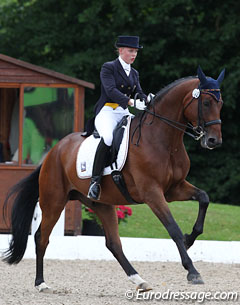 Voigtlander pushed her tall bay gelding forwards in the trot work, riding big extended trots and showing good bending on the voltes. On the right volte he lost his balance slightly. The collected walk was good, in the extended he could have dropped the neck more. The canter work included wonderful flying changes. In the left extended canter on the diagonal Laetitian became crooked in the body. The bay always stays nicely at the poll throughout the test. The halts need some work. The first one was wide behind, the last one stretched in the body.

Trained by her mother Julie and occasionally by Christoph von Daehne, Pia Katharina prefers to prepare herself for a test on her own. "I concentrate. I don't like 10 people around me who constantly ask me if I'm nervous," she said. "I even told my sister to go buy a pizza or something."

Voigtlander is a new comer on the German team and did not expect to win an individual medal. She said that Laetitian wanted to work for her but that the canter could have been better. "Tomorrow I will have to ride a little more

Swedish based Dane Anna Zibrandtsen was shocked to have won the bronze with her 9-year old chestnut mare Capriciella (by Cordoba x Wenzel I) and out of the blue became Denmark's biggest shooting star of the season. 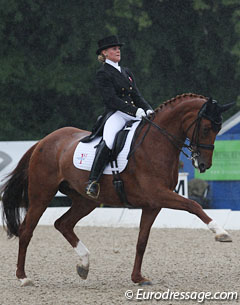 Capriciella has tremendous cadence and ground cover in the trot with a flashy front leg and a well engaged hind leg. Her extensions and half passes were superb. She became tense in the back in the collected walk but the extended walk was world class. The walk pirouettes could have been better. The entire canter tour was very forward and energetic so it could have shown more general collection.

The pair scored 72.842% which put them on the third step of the podium. "It was a good day today. My horse was fresh. She did a nice test but I made a mistake. I have to handle that better," Zibrandtsen said at the press conference.

Anna's parents were also the most nervous on her team, while she handled the show stress well. "My parents had problems with holding the camera still," she joked. "They make me stronger and I have to get comfortable with the situation."

Zibrandtsen only switched to dressage six months ago after having spent her teenage years focusing on show jumping and eventing. Double knee-surgery and a job at Jan Brink's barn in Sweden enabled a change of heart and made her switch to dressage. "I had to pick a line. If you want to be one of the best, you can't do three disciplines. Dressage is my passion," said Anna.

The very eloquent 17-year old is having the experience of a lifetime working with Brink at Tullstorp Stables. "Jan is so professional and at the same time he has a big personality.  The chemistry was there. I'll be there forever if he wants me." 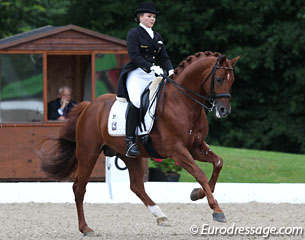 The 18-year old Schutte and her 7-year old Hanoverian stallion Eloy (by Earl x Wendenburg) rode an energetic, sparkling test. The junior was working hard in the saddle and could have had a quieter posture, but she accomplished great things in the individual test. The flying changes on the centerline were super straight and the trot half passes had much ground cover. The canter strike off in the simple change was hesitant and the collected walk before the left walk pirouette was mediocre.

Lena's peer Nanna Skodborg Merrald did a beautiful test in which the trot work was the highlight. Her 10-year old Danish warmblood gelding Millibar (by Milan x Liberty Dane) has much suspension and showed elastic half passes and big extensions. The collected walk lacked collection and the extended walk could improve on overtrack. The canter was really outstanding with big flying changes and a lovely simple change. Skodborg Merrald was well on her way to grab an individual medal but in the last movement before the halt, the extended canter, Millibar made an unscripted flying change. The shock was immediately visible of Merrald's face who had really been going for a high class test.

Back to the 2011 European JR YR Championship Index