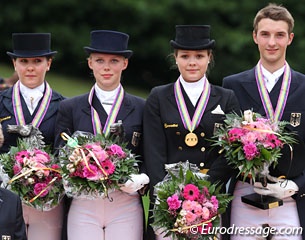 The Berlin based Pia-Katharina Voigtlander landed all the way at the top of the ranking, outclassing 61 other junior riders and assisting significantly in clutching team gold for Germany at the 2011 European Junior Riders Championships in Broholm, Denmark, on Thursday morning 21 July 2011.

Voigtlander rode a test to the dot and did not make any major mistakes. Her 10-year old large framed bay gelding Laetitian R (by Lord Loxley x Cartier) is certainly challenged by his conformation as he is long in the back, slightly downhill, not super supple in the top line, and slow behind. However, the cheerful Pia Katharina did an applaudable job in steering the power house with much precision and lightness through the test. They started off with a halt that was wide behind but then rode a very powerful trot tour. The extensions were huge, the half passes smooth as the horse stayed cadenced in the lateral movements. The collected walk was very good at the beginning but the clarity got compromised in between the walk pirouettes. The horse was neatly steered through the canter movements with big flying changes and ground covering half passes. 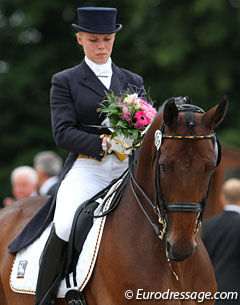 Voigtlander scored 73.622% to snatch the lead from team mate Vivien Niemann on Cipollini, who dominated the first half of the junior team test with 73.432%. At the end Niemann ended up second. Their third ride, counting for the team ranking was Jonas Schmitz-Heinen's. He scored 70.541 to place fifth. Germany totaled  217.622 points to win team gold.

One of the few male riders at this Championships, Jonas was also astride a more old-fashioned, not so elastic type of horse, Der Daimler (by Don Gregory x Worldman). Schmitz-Heinen earned his high points with accuracy. He rode quite conservatively in order not to lose points. The extended trots were correct, but expressionless. The horse stayed well balanced in the voltes and half passes. Der Daimler missed impulsion in the collected walk, which resulted in walk pirouettes that got blocked. The extended walk was ground covering but could have been more over the back. It was more of this same, safe riding in the canter. The horse almost moved in slow motion but jumped good flying changes. In the extended canter he finally put some power into his test. 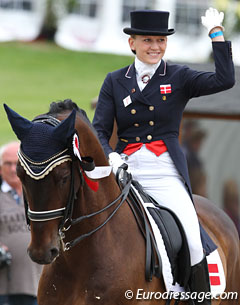 Denmark made history by winning their first team silver medal. A Danish female foursome was on a high and with two scores round 70% they finished on second place with a team total of  211.324 points.

The anchor of the team was Nanna Skodborg Merrald on the Danish warmblood gelding Millibar (by Milan). They excelled with well carried trot work in which the balance was outstanding. Millibar showed good bend in the voltes and large half passes. The only mistake in their test crept into the walk section when Millibar cantered instead of trotted in the transition from collected walk. The canter work was slightly less expressive as Millibar is a bit flat in the shoulder, but the routine they showed in executing the flying changes and canter half passes was fantastic. With some more goodwill from the judges this test could easily have placed her first in the ranking. Skodborg Merrald finished third with 72.919.

Anna Zibrandtsen and her flashy, electric mare Capriciella (by Cordoba x Wenzel I) were the second highest placing Danish pair, finishing on 8th place with 69.459%. The mare is very well engaged from behind, lifts her front legs to an almost horizontal stretch in the extended trot and is certainly hot to trot in the test. Some minor communication errors tampered with the harmony of the ride. The duo made a mistake in the rhythm in the first extended trot and was hesitant in the second. The collected walk had to be clearer in rhythm and the horse took off in the second flying change. The canter work can still improve on balance and collected but overall it was a sparkling ride with much energy.

Dutch Disillusion: The Netherlands Get Bronze 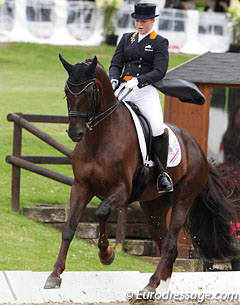 It wasn't the day of the Dutch at the 2011 European Junior Riders Championships. Much was expected of Stephanie Kooijman and her phenomenal Dutch warmblood gelding Winston (by OO Seven) but a string of mistakes made their score plunge to unprecedented depths (67.054% - 17th) which ruled out Holland for gold or silver.

Kooijman and Winston were the ones to watch as they had scored highly on the European scene this season. Unfortunately there was just too many issues to make them hit the 70% marker. There was hardly any bending in the voltes and Winston broke into canter in the right half pass twice. The horse was slightly fidgety in the mouth as he was not really through on the right rein. He became unsteady with his head in the collected walk which was mainly slow instead of collected. Winston couldn't minimize the damage with the movements he did strongly. The extended trots were world class, the walk pirouette left was lovely and three out of four flying changes were well done.

2010 European Kur Pony Champion Antoinette te Riele had to bite the biscuit and rescue what was left to save for Holland. Aboard her Hanoverian mare Fleurie (by Florestan x Akzent II) she showed nice things but could have been much more precise. The halt at entry was wide behind and the hindlegs were trailing in the half pass right. The rein back was with dragging legs. The dark bay/liver chestnuty mare had good balance in the voltes though but could have more spring off the ground. The extended walk was excellent with super relaxation and overtrack. The collected walk and pirouettes missed activity and impulsion. The canter half passes were lovely and all flying changes went really well but overall Fleurie could show more collection in canter. They scored 71.081% to finish fourth.

Anne Meulendijks and her huge Dutch warmblood Ohio (by Indoctro) were the second highest scoring Dutch pair with 69.703%. The Netherlands achieved a team score of 209.243 points.