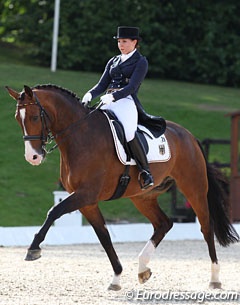 German combination Vivien Niemann and her Hanoverian gelding Cipollini (by Compliment x Western Star) excelled in the first group of the junior riders team championship test at the 2011 European Junior Riders Championships in Broholm, Denmark, on Wednesday afternoon 20 July 2011. The German pair was a league of her own with her brilliant, uncomplicated and faultfree ride.

Niemann and her very sympathetic bay gelding started off with excellent trot work in which there was much flow, cadence and self carriage. The halt for the reinback was stunning, though the rein back itself was quite hesitant. In trot the hind legs could step under a bit more, but the work looked light and easy nonetheless. The collected walk was well regulated but there could have been more activity in the walk pirouette to the right. The canter tour was very solid. Four beautiful flying changes, though one was croup high but the others very uphill. There was no doubt about it that Niemann would take a strong lead with 73.432%.

Dutch Anne Meulendijks and her large framed, tall black KWPN bred Ohio (by Indoctro) followed in a distance on second place with 69.703. The black has nice knee action and picks up all four legs nicely in trot but could have show slightly more suppleness in the body, especially on the curved lines. The halt before reinback was not square. Meulendijks lost her points in the canter work as she had issues with one flying change. One change was slightly short in the shoulder and could have been more groundcovering, but the other was late to the aids and in two phases. The former pony rider held a light and constant contact with the bit, which was lovely to watch.

German Lena Schutte got a big present from the judges' panel, which consisted of Fransen-Iacobaues, Tornblad, Riexinger, Philips and De Wolff van Westerrrode. Her 69.378% score, which provisionally ranks her third, was extremely generous as the ride was far from being top class. Her gorgeous chestnut stallion Eloy (by Earl x Wendenburg) had no gas in the tank and Schutte had to visibly spur him onwards throughout the test. The transitions were rough and there was hardly any willingness to go forward. There were mistakes in the rhythm in the extended trot and volte left. The extended walk was good, the collected stayed clear in the rhythm but lacked drive. Though all flying changes were executed correctly, they were more up than forward. 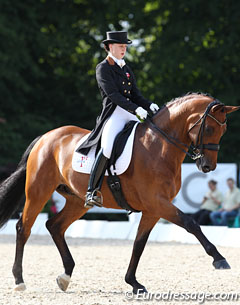 Danish Nanna Bronnee Madsen and her Danish warmblood Skjoldsgaard Monte-Vo (by Munchhausen x Schwadroneur) received 68.946% from the panel. The dynamic duo generates a very nice silhoutte with much lightness. The horse is obedience to the aids and even though he has good cadence and rhythm in trot and canter, he could overall be more uphill and a bit higher in the frame.  Especially in the extended trots he had a tendency to go slightly deep.

Two riders tied on fifth place so far. Dutch Rosalie Mol and her 8-year old Legend (by Likoto xx x Weltmeyer) had a very expressive trot tour in which there was much activity from behind. The mare has a beautiful front leg but could improve on the uphill tendency. The rhythm got compromised in the extended walk despite its overtrack. The canter work was maybe a bit too accellerated as the collected was slightly missing. British Philipa Hutton and the chestnut mare Duela (by Dimaggio x Alabaster) achieved the same score as Mol, 68.459%. The mare lost her self carriage a bit in the extended trots, but she was always light in the bridle. In canter she showed wonderful big flying changes.