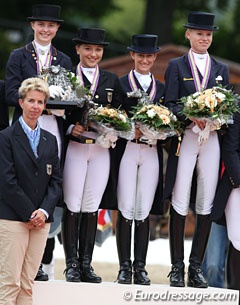 A stunning ride by Louisa Luttgen sealed the deal for Germany to bring home team gold at the 2011 European Young Riders Championships at Broholm Castle in Gudme, Denmark, on Thursday afternoon 21 July 2011. Luttgen and her Hanoverian gelding Habitus (by Hohenstein x Weltmeyer) were the last Germans to enter the ring. The German team had already safely settled itself in first position after three riders, but Luttgen capped it off by scoring the highest of all riders in the team test.

Louisa and her dark bay gelding were certainly not fault-free, but there were numerous highlights that seemed to have made up for those. The trot work was outstanding: uphill, engaged, balanced and light in the bridle. The Kerpen based rider dealt swiftly with a spook in the right volte and didn't lose momentum to be able to show a wonderful half pass to the right. The collected walk wasn't high class. In between pirouettes the Hanoverian got tense and started to pace, which also resulted in a big right walk pirouette. The canter work was sparkling. The horse was relaxed, steady in the contact and uphill all the time. Luttgen slightly struggled with the first pirouette and rode a big second one, but the tempi's were brilliant. 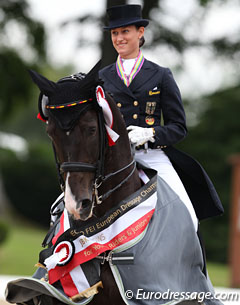 Luttgen scored 74.263% which brought Germany's total to 219.737 points. A key factor to that high score was Sanneke Rothenberger, who finished second, followed by another German, Charlott Maria Schurmann on Donna Jackson, the leader of the first half of yesterday's Team test.

The Bad Homburg based Rothenberger scored 73.105%. Aboard her Oldenburg gelding Deveraux OLD (by De Niro x Rubinstein) she wowed in the trot part of her test. The horse has extreme cadence and beautiful front leg usage. He did lose the rhythm in the second extended trot and leaned on the bit in the voltes, but the tempo and rhythm were excellent, even in the lateral movements. The walk pirouettes were small, the extended walk had good relaxation and overstep, even though the 4-beat could be clearer. In canter Deveraux got a bit stiff-legged. Two flying changes were slightly flat and the tempi changes were so collected that they lacked expression and ground cover. However, they were jumped correctly.

"With the Young Riders we were more experienced with both Louisa Lüttgen, Sanneke Rothenberger and Charlott- Maria Schürmann, though Charlott- Maria Scürmann is on a new horse, after the one she had last year was sold to Denmark," said German chef d'equipe Maria-Schierhölter-Otte. "This start for us of course is very fine and I'm sure that the next days will bring a lot of good sport and fair riding. This has been a very good championship, the organisers have done well, the stables are fine and we are very happy to be here.“ 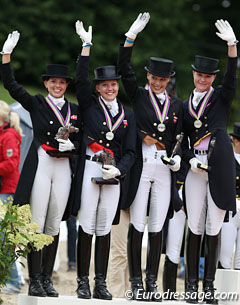 The team championships test at the 2011 European Young Riders Championships turned out to be an eventful class in which the Dutch team disappointed almost to an unbelievably, surreal level as none of Holland's outstanding riders were able to stay fault-free. This left quite some room for home favorite Denmark to snatch the silver!

The best Danish young rider was last year's European silver medal winning Cathrine Dufour on her 8-year old Danish warmblood Atterupgaards Cassidy (by Caprimond x Donnerhall). The talented and elegantly riding Dufour was able to keep the lid on the cooker of her hot-to-trot chestnut gelding. The trot had much self-carriage and spring even though the horse sometimes got a bit uneven in the length of his steps especially on the voltes. The walk pirouette right was blocked but the extended walk was outstanding. The compact horse showed much stretch in the neck and good overtrack. In canter the pirouette left could have been slightly rounder and the right one could have had more sit. The four tempi's were big but had to be more forward. In the three's the horse got hot, but Dufour managed to do them fine.

The pair finished fifth with 71.605% and was just ahead of team mate Rikke Bollingtoft on Finale, who was yesterday in the top three after the first half with 70.263%. Denmark totalled 210.947 points with the team, good for silver!

"The team performed super today. They showed confident riding and were well prepared for this competition," said Danish chef d'equipe Hans Christian Mathiesen. "I think the fact that we are in close contact with the riders already when they are competing in the ponies division makes the difference and has turned them into silver medalists today. Only young rider Rikke Bøllingtoft has competed previously in a young rider FEI European Championship. The rest of the riders are debutants in the young rider team at an FEI European Championship – so their performance is very much approved today."

The Dutch Get Bronze: Take a Deep Breath 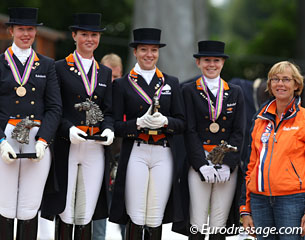 With The Netherlands' two best riders still to go today, the Dutch had high hopes of going for silver, preferably gold. Unfortunately the most experienced riders of the team could not live up to the expectations and made atypical mistakes, which made the team drop to a third place with 209.447 points.

Melissa Tychon, who placed second provisionally after the first half, remained the highest scoring Dutch rider with 72.158%. At the end of the day it ranked her fourth. Michelle van Lanen was the first "orange" rider to go this afternoon but her massive Dutch warmblood Urchin B (by Jazz) made a small mistake to the rhythm in the extended trot and suffered some loss of balance in the left circle at the beginning of the test. Unfortunately her liver chestnut gelding spooked in the right volte and became hot in the canter, despite showing wonderful, ground covering tempi changes. They finished 30th with 64.289%. 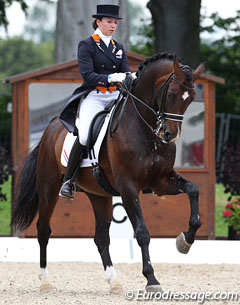 All eyes and hopes were fixed on Angela Krooswijk and the Rhinelander stallion Roman Nature (by Rohdiamant) to save the day, but the most experienced young rider of Holland couldn't finish the job. Even though the trot work was confident and expressive, some light tension crept into the collected walk. In canter the pirouettes were sloppy and there was a short change at A. Then Krooswijk made mistakes in both the four and three tempi's. Her score dropped to 68.737% (10th place).

It was a strange sight to see Dutch chef d'equipe Tineke Bartels so gloomy at the show grounds but the experienced rider and trainer quickly recovered from the disappointment to focus on the future. "I've noticed that these girls are growing up in a pleasant way," she said. "It doesn't really show in the colour of the medal now, but I'm proud to see that they are not blaming their horse when it comes to big disappointments. No matter how hard it is, they are trying to find the fault within themselves. That is the way to move on. I also keep in mind that there are still twelve medals to be earned this week, six for the juniors and six for the young riders. Just take a deep breath and go for it again. That's the sport."