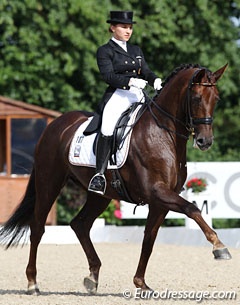 Aboard her 10-year old Bavarian branded mare, Schurmann produced a solid, confident test in which the outstanding self carriage in trot, the well controlled walk and huge tempi changes were the strongpoints of the ride. The mare slightly swings out from the knee with her left hind leg but she is active and willing to work. In the pirouettes, however, she lacked sit, especially in the left one. The right one was better. The tempi changes were very ground covering but could have shown slightly some more collection. Nevertheless it was the best ride of the day and the pair scored 72.368%.

Dutch Melissa Tychon and her Trakehner bred Marinetty (by Solero x Itaxerxes) followed closely as runners-up with a 72.158% score. The bay gelding's trot work is maybe less expressive than Donna Jackson's but he executed the movements with much correctness and flow. He became slightly quick at the end of the second extended trot. The extended walk had much relaxation and good overtrack but could have been a bit more active. There was a minor hesitation in the walk pirouette left but the right one was good. In canter the pirouettes were well done but there could have had a bit more roundness. The only "real" mistake in the test came in the tempi's every three strides in which the first change lacked accuracy. In general it was a nice ride and there was little doubt about Tychon's well earned second place so far in the provisional ranking of the team test. 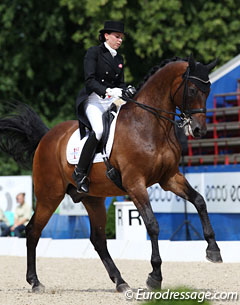 The Danish home crowd was ecstatic when their team mate Rikke Bollingtoft and the 18-year old Danish warmblood Finale (by Fanal Prydsholm) finished third with a 70.263%. The large framed, heavy bodied Finale is quite an old-fashioned looking horse but this schoolmaster has so much experience to boot and is just rock solid in the test. Even though his rider had to visibly spur him forwards to motivate him, the horse moved with tremendous cadence. The canter work brimmed with confidence: steady pirouettes, ground covering three and four tempi's. He might have stayed a bit more uphill in them but they were lovely.

German Annabel Frenzen aided in the provisional lead of Germany in the young riders nations' cup by ranking fourth with her sturdy, strikingly paddling Holsteiner Cristobal (by Coriander x Caribo). The bay made a mistake in the rhythm in the first extended trot. The half passes were nice. The collected walk as well as the pirouettes were well regulated but slow. Cristobal desperately needed to be more electric and forward in them to score higher. The extended walk had a clear rhythm and good overstep. Frenzen had to deal with a spook at M in canter, but handled it well. The pirouette left was good, the right one so so. The four tempi's were solid, the three's super straight. Overall Cristobal had to be a bit more active and quicker behind to score more. Their conservative ride earned them a 70.132%.

Last year's junior bronze medallist Danielle Houtvast has made the transition to young riders and her hopes are high, of course, to peak at this event. Aboard her Dutch warmblood Rambo (by Gribaldi x Amor) she unfortunately made too many little mistakes to finish at the top in the team test. There was an error in the rhythm in the extended trot and the shoulder in left was quite steep. The half passes were nice. The clear beat in the collected walk got a bit lost before the pirouettes, which also could have been a bit more accurate. The beautiful Rambo covered much ground in the extended walk. The pirouettes are the horse's forte but he made mistakes on both diagonals in the tempi changes. They received 68.553% from the judges' panel, which consisted of Eisenhardt (GER), Colliander (FIN), Kruger (DEN), Verbeek (NED), and Markowski (POL).