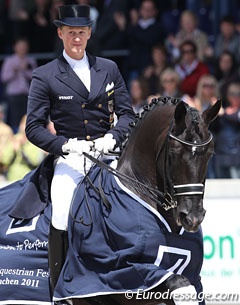 Matthias Alexander Rath and Paul Schockemohle and Ann Kathrin Linsenhoff's KWPN stallion Totilas achieved a hattrick by winning all three CDIO Grand Prix dressage classes at the 2011 CDIO Aachen, but it was Steffen Peters who was the King of the Freestyle and won the hearts of the crowds. The German born American outclassed Rath in the Kur on Sunday morning 17 July 2011 but ranked second.

The order of go in the freestyle was bound to create an interesting climax. The final five horses were the big timers: Parzival, Mistral Hojris, Totilas, Ravel and El Santo. Unfortunately a totally distasteful and politically incorrect promo talk took place during a break right before the final group of horses was to appear for judging. A German announcer dragged Paul Schockemohle into the stadium to do an interview for the public in which Schockemohle praised his 10-million euro stallion for his greatness and unicity. Talk about unfair promotion and publicly lobbying and influencing opinion in favour of a certain horse!

Matthias Rath and Totilas were the third last to go and because Cornelissen and Bechtolsheimer had both made mistakes the field was wide open for a victory. Paul van Dyk's intro for Totilas' freestyle is powerful and dramatic with lots of tipani rolls. It is the musical highlight of the test. The extended trots were back to their usual self: no overtrack and frontlegs flying high. The extended walk, however, had good overstep. The trot half passes are the pair's forté. The piaffe and passage showed great elevation of the legs as well as bounce of the ground. Both the one tempi's and the two's went wrong but fortunately Rath was able to redo the two tempi's on a final diagonal which has been incorporated as "correction line". The music does not mark a particular movement anyway so he could ride whatever he wants on that line. It was striking that the horse often became behind the vertical and in the end halt he had the chin on his chest (and still scored a 9 from Seefried for entrance and halts?). The freestyle was Rath's least performance of the week but he still received a winning score of 82.825%.

"It's been a perfect week. I had a really good feeling," Rath said at the press conference. It was Rath's second time that he rode his freestyle to a floorplan modified from the version at the 2011 German Championships in Balve. "We had little mistakes. In our first shows we really concentrated on the Grand Prix and Special. We are good and constant so now I'll work on the freestyle. We will train very hard the next few weeks and develop the freestyle." The 2011 European Championships will be Rath's next show 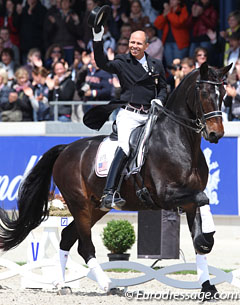 The true winner of the Kur was ranked second with a minimal point difference, even though he surpassed Totilas by a mile. Steffen Peters promised to have a new freestyle designed after the World Equestrian Games and he lived up to his word. His new music was a quiet, subdued,  orchestral piece with much religious choral chanting. The Avatar-inspired music lacked climactic effect at the end but it was refreshing to hear something new in the current day dressage world, in which change, novelty and modernization in the freestyle is missing.

Peters and Yamazaki's Dutch gelding Ravel (by Contango x Democraat) were the crowds' favourites and executed the cleanest test of all. They had made a few minor changes to their choreography and upped the degree of difficulty. They kept the tempi changes on the curved lines but added as highlight an extended canter followed by a double pirouette, then by one tempi's on the centerline, followed by a double pirouette, a direct transition to piaffe and then  a relaxed extended walk. Peters had only one minor mistake in the one tempi's of which the first change was short.

When Steffen's 82.000% score appeared on the board the crowds booed in disagreement. To them Peters was the winner and it wouldn't have hurt the sport if the American had ranked ahead of hyped Totilas. Furthermore it was also very striking that Peters received more applause and cheering during the prize giving than Rath. It are certainly exciting times for the sport because so many top riders rank closely together, all  breathing down each other's neck. In the Aachen freestyle Peters outshone Rath.

"Ravel gave everything he had today," said a thrilled Peters at the press conference. "We knew we were close and knew we have a hell of a freestyle. You always dream of that first place." Peters mentioned that the support of the crowd meant much to him. "It was very exciting for me. It was the icing on the cake when I heard the score and the crowd was reactive. As a foreigner it felt very special. I still have to look for the proper words to describe it all." 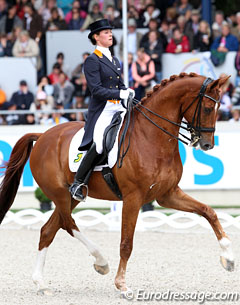 Dutch Adelinde Cornelissen was treading on Peters' heels with her third placing 81.775% score. Aboard her 14-year old Dutch warmblood Parzival (by Jazz x Ulft), Cornelissen rode to her 2011 World Cup Final winning music based on The Nutcracker and Swan Lake.

After her entry in walk she started with energetic trot work but Parzival twice broke into canter in the half pass to the right. The extended trots were ground covering. The passage had much spring but in piaffe the chestnut pulled his hocks high or trod on his own feet. The regularity and rhythm of the movements were very good. The canter tour was marked by numerous pirouettes which were well executed and beautiful as they are the horse's strong points. The tempi changes on the centerline were fantastic. Adelinde had much more control over her horse and the total silhouette was more friendly than in the Grand Prix Special. If she had not made those two errors victory could have been theirs.

"I was really happy," said Cornelissen after the class. "Parzival was really good. I had a big mistake in the half pass and that cost a lot of points. I got 3s and 4s for that."

The Dutch have one more observation trial ahead in Hickstead, England, but as anchor of the Dutch team she has already proven her worth. At the press conference Cornelissen expressed that she probably won't be riding there. "I'm not sure about Hickstead," she said.

Bechtolsheimer Caves In to Pressure 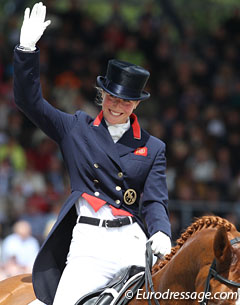 For 26-year old Laura Bechtolsheimer the 2011 CDIO Aachen will not go down in her books as one of the highlight shows of her career. After her below-par Grand Prix Special, Laura failed to recover her usual 80+% scoring form on the 16-year old Danish gelding Mistral Hojris (by Michellino) in the freestyle.

Her kur to music by The Shadows accentuates the crystal clear rhythm of all three basic gaits of her horse. In piaffe and passage he moves like a metronome. The half passes were great and normally Mistral's extended trots are superb, but he twice broke into canter on the diagonal. The two tempi's were good but there was a mistake in the ones. Small issues also meddled with a high score. In the pirouettes the horse really takes the weight on the hindquarters but one right pirouettes was slightly big in the exit The end halt was also not immobile. The pair got 79.825% and slotted in fourth.

“I put myself under enormous pressure, because I wanted to win here,” she admitted after the freestyle. “But it was bound to happen sometime or other that things didn’t go as perfectly as I’d planned. It is a shame, but now I am just pleased it happened here so I can concentrate on myself again in future. I simply put myself under too much pressure."

Laura also revealed that a tack malfunction threw her off guard. On the day of the Special Mistral's custom-made noseband with soft leather broke and had to be replaced by one from another competitor. "Alf just didn't get accustomed to the feeling of the new noseband and I felt it in the contact. My half halts were not coming through as well as usual," she explained. "But I learnt my lesson. If you have something custom-made, make sure you get two!"

Koschel Knocking at the 80% Door 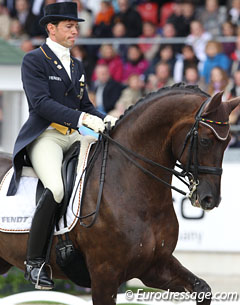 Hagen based Christoph Koschel and his 12-year old Finnish warmblood gelding Donnperignon (by Donnerhall x Matador) have beautiful music based on the hits of Sting. The passage, trot half passes and extended trots were magnificent. The diversity in movements with matching mirroring choreography are a pleasure to watch. The piaffes were small and need to have more bounce off the ground but the final piaffe pirouette was nice in rhythm. One change in the two tempi's was short and the ones could have been more uphill and expressive (especially those executed on the diagonal). The extended canter was fantastic. In the end halt Pepe went behind the vertical.

There were many wonderful elements in Koschel's freestyle and the potential to score above 80% is certainly there. They ended up with 79.700% and a fifth place.

Isabell Werth premiered her new freestyle for El Santo NRW (by Ehrentusch) and as last rider to go she certainly excited the crowds by bringing beat and fun to the stadium. Her David Bowie inspired kur (Let's Dance) with an infusion of Queen (Under Pressure) had plenty of tempo. New freestyles are always very welcome in the dressage world as riders tend to recycle their music for much too long. 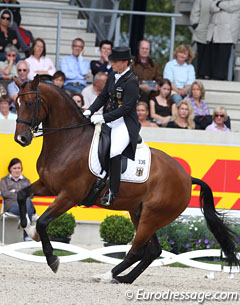 The opening was wonderful: passage half passes followed by forward trot half passes in the other direction. The piaffes were cleverly limited in steps because Ernie still needs to improve on them. He tends to get wide in front. Mistakes crept into the canter work even though he started out strongly with a powerful uphill extension and good one tempi's. Right before the double pirouette to the left near A, Ernie spooked, fell into trot and Werth had to rely on her great riding skills to get her horse back in canter quickly for the pirouette. When she repeated that movement on the right lead another disruption happened before the pirouette. Those two big problems, however, didn't damper her spirit as Werth was joyfully singing along to the music. To finish off her test Isabell rode an extended trot on the centerline with one hand but the horse leaned on the bit and got very long in the frame. It was a fun and difficult movement but its execution needs to be better in Rotterdam to score high points.

Because Werth's freestyle was so much fun -- with a rider visibly enjoying her test -- Isabell's 78.725% score came as a disappointment to the crowd. Yet considering the mistakes that score was not abnormal.

"I'm overjoyed, absolutely overjoyed with Ernie," Werth explained. "OK, in the kur he spooked from a billboard before the pirouette, but he was simply grand. To finish twice third in such a strong field with many experienced championship horses is an enormous performance for a young horse. He is a truly great horse. He has so much go, is elastic, loose in the body, willing to learn and very through. It is a joy to work with such a horse and I'm looking forward to my first Championship with him."

Back to the 2011 CDIO Aachen Coverage