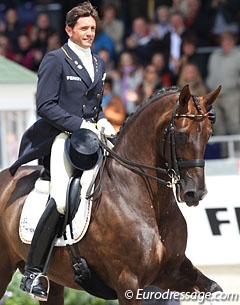 Following the 2011 CDIO Aachen, the German dressage selectors nominated the team that will represent Germany at the 2011 European Dressage Championship in Rotterdam, The Netherlands, on 17 - 21 August 2011.

Becuase Anabel Balkenhol was unable to ride at Aachen, the second official German E.C. qualifier after Balve, due to the fact that Dablino knocked himself in the warm-up, she was not given the benefit of the doubt and immediately got booted to the first reserve position in favour of Helen Langehanenberg and Damon Hill who won the CDI Grand Prix Tour in Aachen. Langehanenberg has been showing great form at the World Cup Finals, German Championships and Aachen, but has been consistently scoring lower than Balkenhol with Dablino who almost reached 80% at the CDI Hagen and German Championships.

The first reserve is Anabel Balkenhol on her Hanoverian gelding Dablino (by De Niro). Isabell Werth is allowed to ride Warum Nicht (by Weltmeyer) in case El Santo is not fit.

Other reserve riders are Nadine Capellmann with Elvis VA, Hubertus Schmidt with Valentino G and Monica Theodorescu on Whisper.