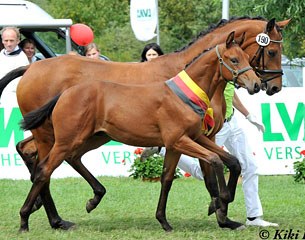 A Furstenball colt and a Surprice filly were proclaimed champions at the 2011 German Foal Championships in Lienen, Germany, on 16 - 17 July 2011. Twenty-two foals in total made it into the end ring where the judges picked the national champion and ranked the other foals.

Twelve colts made it to the final championship ring on Saturday 16 July. Bernd Ilting-Reuke's Furstenball I x Sir Donnerhall colt scored a staggering total of 98 points and was a league of his own in the colt category. The bay referred Bianca and Jörg Opper's Ampere x Fidertanz colt to a second place with 92,50 points. Hermann Peter Rabeler's Furst Nymphenburg x Donnerhall was third with 92.000 points.

On Sunday 17 July 2011 ten fillies were picked to battle it out for the national championship title. Petra Fockenberg's in-bred filly by Surprice (by Sir Donnerhall I x Prince Thatch xx) offspring out of a Samarant (Sandro Hit x Brentano II) dam scored 93,5 points to best the filly division at this year's national championships. She was followed very closely by the runner up, a Fiderstep x Rubinstein I filly, bred by Heinz Schutte. This young mare scored 93,33 points. Norbert Schmidt's Quaterback x Lauries Crusador xx finished third with 92,50.