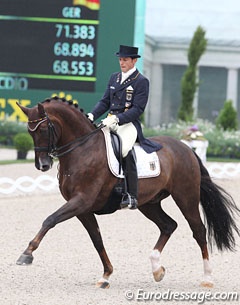 Twelve riders out of a field of 36 scored above 70% in the CDIO Grand Prix at the 2011 CDIO Aachen on Thursday 14 July 2011. While on Wednesday it was pouring all day, on Thursday the sky was heavily overcast and except from a few brief rain showers it stayed dry all day for the dressage class.

While the five highest scoring horses in the world landed at the top of the leader board as expected, it was exciting to see who came closest to this elite. Christoph Koschel and his Finnish warmblood Donnperignon (by Donnerhall x Mozart) were the ones knocking at the door slotting in sixth with 73.362%. The gorgeous liver chestnut gelding, which is nick named Pepe, was brilliant in the trot tour and walk and showed fantastic passage and super pirouettes. Only in the piaffe the rider and horse struggled with the rhythm. Donnperignon lost impulsion and should have bounced more off the ground despite the rider working it (too) hard in the saddle. In general the horse should have been a bit more uphill in the neck with the poll as highest point, but the lightness and obedience Pepe showed was brilliant. They scored 73.263% but the judges could easily have been more generous with their points for this ride.

Swedish Tinne Vilhelmson-Silfven and Antonia Axson Johnson's Rhinelander gelding Favourit (by Fidermark x Worldchamp) were 7th with 72.745%. The chubby liver chestnut has a wonderful movement mechanism with ground covering extended trots and regular passage but he lacks suspension and bounce in the piaffe and the left pirouette was quite big. The wonderful one tempi's helped to push the score up. 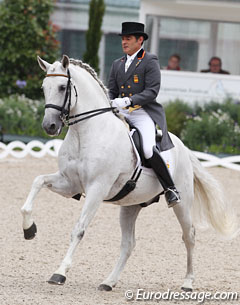 Spanish WEG shooting star Juan Manuel Munoz Diaz and his Andalusian stallion Fuego (by Utrerano VII x Elegido III) started out his test well with beautiful half passes but the rider had to keep the stallion from becoming hectic in his gaits. The trot extensions are outstanding. The piaffe, which is usually the highlight gait of an Andalusian Grand Prix horse, was quite static with Fuego hardly bouncing off the grounds in a 2-beat. Fuego's piaffe was quite static and even though he lifted his legs highly, he lacked spring. Impulsion was missing in the piaffe at X. The one tempi's were great with much ground cover but the pirouette right, for instance, lacked scope. The score got stuck at a still great 72.106%.

Newly wed Danish Nathalie zu Sayn-Wittgenstein and her home bred Danish warmblood Digby (by Donnerhall) were 9th with 71.489%. The dark bay gelding has improved much in his self carriage and can cover more ground in the extended trot. The passage was super regular, the pirouettes tiny and the two tempi's delightful but unfortunately Digby refused in the second piaffe, which cost the pair many points. The contact with the bit is examplary and Digby stays at the vertical as consistently as it comes.

Edward Gal and his sensitive Dutch warmblood mare Sisther de Jeu (by Gribaldi x Amor) were on their best form this season. The mare was much more focused on his rider than usually and looked not at all distracted by the Aachen show ring. The collected walk was more regular and in the pirouettes the mare took the weight on the hindquarters. In the second piaffe she made great effort to sit. Sadly a string of minor mistakes tampered with the score. The mare was not immobile in the halt, she did not really engage much in the passage but only pulled her hocks high  and there were issues in the one tempi changes. They scored a total of 71.489 with 69.681% from Alonso and a high 73.234% from Eisenhardt.

British team new comer Charlotte Dujardin brought her second ride, the Westfalian gelding Fernandez (by Florestan), to this show to finish in a fabulous 12th place on her Aachen debut. The chestnut gelding was presented with good energy and much regularity in his gaits, especially in trot. The straight tempi changes were a highlight of the test. There was a loss of energy in the second piaffe and he became wide in the piaffe at X. Fernandez was light and soft in the bridle all the time. The pair scored 71.383%.

Brand new Dutch Grand Prix champion Hans Peter Minderhoud slotted in 12th with the Dutch warmblood licensed stallion Tango (by Jazz x Contango). The cute chestnut gelding started off with a very nice extended trot and half pass to the right. Tango has wonderful buoyancy in passage but the first piaffe was quite small and in the second the transitions to and from passage could have been smoother. The horse covers much ground in the trot extensions but in the second one he was tilting the head to the left. The energy and forwardness were good in canter but Tango lost balance in the zig zag and in the one tempi's there should have been more uphill tendency. The pair scored a fair 70.128%.

Related Link
Eurodressage On the Scene at the 2011 CDIO Aachen