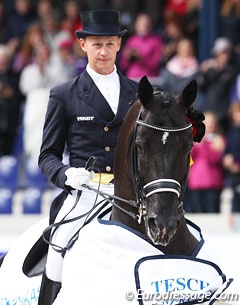 German Matthias Alexander Rath and his 11-year old Dutch warmblood stallion Totilas controlled the ring in the Nations' Cup Grand Prix at the 2011 CDIO Aachen on Thursday 14 July 2011. Rath added his first individual Aachen trophy to his cabinet in the heavy weight battle of the year as the world's five best Grand Prix horses are facing each other in Aachen for the first time since the 2010 World Equestrian Games.

Finally the Totilas' point hysteria of 2009 and 2010 seems to be over now that the black stallion has moved on to a new rider. Dressage seems to be focusing more on its essence and the sport has become cutting-edge again as faultfree rides and looseness and relaxation determine the winner instead of flash, extravagance, and mass aberration for a novelty. The Dutch stallion is now awarded more "realistic" points for each of his performances which makes dressage in 2011 more exciting and thrilling than ever before.

Rath in Control in the Nations' Cup Grand Prix

With three test-event down his belt (Munich, Wiesbaden, Balve) Matthias Rath has discovered the buttons on his stallion and in Aachen the 25-year old was able to really ride his horse. 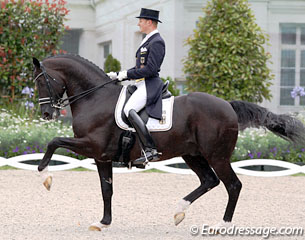 While Rath significantly improved the length in the frame of his horse, the stallion still has a tendency to drop behind the vertical and not have the poll as highest point (especially in the extended trots which fundamentally lack overtrack). The trot half passes were brilliant. The piaffe and passage were off the ground and powerful but the transitions can be smoother as the horse almost sits too deep in the piaffe. Totilas has such extravagant elevation in the front leg that he makes it hard on himself to establish seamless transitions. The extented walk had tons of overtrack and the collected walk was super in clarity of rhythm. In canter the two tempi's were correct but lacked straightness in the body. In the zig zag there was a problem with one of the flying changes. The extended canter was big but the horse got deepl. The same happened in the one tempi's which were ground covering but there was a loss of uphill tendency. The pirouettes were super tiny. The final piaffe at X was crooked in the body but still earned the pair three scores of 9.0 or 9,5 (?!).

The judging panel, which consisted of Fouarge (NED), Alonso (MEX), Markowski (POL), Eisenhardt (GER) and Seefried (AUS), were almost unanimous in placing Rath first with 82.149% (four first, one second), though their individual scores ranged from 80.106 to 85.000. Rath was thrilled with his test and balled a fist after the salute. He then pointed to his horse to give him credit for the work.

At the press conference, the Kronberg based German said that he was "extremely happy. It is really special to ride in Aachen. Last year the Grand Prix was not my favourite test," he admitted. "Now I had one mistake in the zig zag, but I'm extremely happy."

Laura Bechtolsheimer and her Danish warmblood gelding Mistral Hojris were the triple silver medallists in Kentucky and have been one of the ruling combinations on the dressage scene the past few years. The 16-year old gelding shows not a sign of travel and the nearly 18 hands chestnut is just an elegant mastodont which can overpowers his 1.69 m tall rider. However, Laura handles everything smoothly and even though the half halts are sometimes a bit too visibly, all the rest she shows in a test is pure dressage. If Laura and Mistral stay mistake free, not even a Totilas can match their genius. 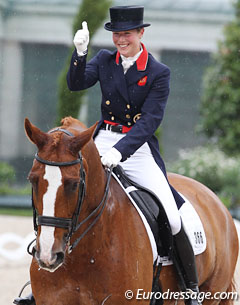 In the Aachen Grand Prix the gelding was a bit impressed by the atmosphere of a sold-out dressage arena but Bechtolsheimer kept her cool and rode a brilliant trot tour. Extended trots to die for, huge ground covering half passes. A piaffe and passage of unparallelled smoothness and rhythmic that should put straight 10s on the board. The extended walk had massive overstep, the collected walk was clear. Only in canter Bechtolsheimer briefly lost her concentration and made two costly mistakes in the two tempi's. The one tempi's were correct but scored between 5 and 7. The pirouettes, which were small and which had amazing lift, earned them discrepant marks between 6 and 9. The pair finished their test with an amazing final centerline for which the piaffe at X got 10. Bechtolsheimer scored nine 10s in her test while Totilas had none in his Grand Prix. Laura scored 80.596% to finish second. The power and purity of Mistral Hojris are unmatched in the ring and to be the number one Laura's task is to steer clear from any faults.

Laura was very cheerful when she left the ring, waving to the crowds and patting her sensitive Michellino offspring, but at the press conference her feelings about the ride were as overcast as the sky in Aachen. "I'm a little disappointed in myself," she admitted. "Alf was on fantastic form, a bit hot at the beginning but he's been better than he's ever been. In the canter I lost him a little bit. I made a few mistakes which is annoying because they were expensive. I'll make sure I'll ride a keener test on Saturday. I think we are in a good position."

With Rath and Totilas winning the class and Isabell Werth as second German team rider placing third, Germany was able to recapture the Aachen Nations' Cup victory with a total of 233.341 points. They were far ahead of silver medallists Great Britain 220.873% and last year's winner The Netherlands which crashed into third place with 218.957, a far cry from their team gold medal succession which they started at the 2007 European Championships in Turin and ended at the 2010 World Equestrian Games in Kentucky. 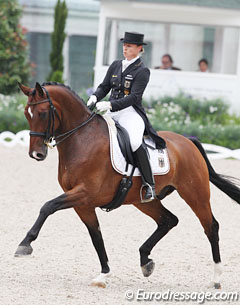 Isabell Werth and El Santo's top form became obvious at the German Dressage Championships in Balve a couple of weeks ago, where they were highly praised by the judges. In Aachen it was no different. The bay Ehrentusch gelding is ridden in a very forward way, typical for Werth. The trot extensions were huge but the horse gets wide behind. The trot half passes were huge. The rein back could have been better. The  passage work was regular and buoyant but El Santo could be more engaged from behind and slightly more closed in the frame. There was some loss of impulsion in the first piaffe, which repeated itself in the second piaffe as well as on the final centerline. The extended walk had good relaxation with much overtrack but in the collected walk he verged on losing the 4-beat rhythm. The canter pirouettes were tiny and the tempi changes huge the one tempi's could have been more uphill. At all times El Santo was light in the bridle and had the poll as highest point. The 10-year old Rhinelander gelding has a great temperament leaving the crazy Aachen arena unphased. He executes the Grand Prix work effortlessly and is a pleasure to watch. The pair scored 77.830% to finish third.

"I'm really happy," Werth said after her test. "He's improving so much from competition to competition. We did a test without big mistakes, just a few little things. We're on a good way."

Cornelissen Not Used to be Being Fourth

Dutch anchor rider Adelinde Cornelissen landed an unusual fourth place with her 14-year old Dutch warmblood gelding Parzival (by Jazz x Ulft). The long-legged, elastic gelding is such a phenomenal athlete but there were just too many minor imperfections for him to breach that 80% barrier. 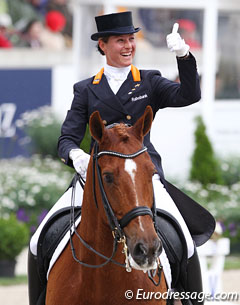 In trot Parzival shows wonderful half passes but the hind quarters were too far out in the one to the left. The halt before reinback wasn't square and in the trot extensions he covers massive ground but hollows his back slightly and the rider hangs onto the bit too much. The passage was wonderful and the piaffe is rhythmical but Parzival is hardly taking any weight on the hindquarters but instead pulls the hocks high. In the extended walk there was one hoof overtrack, but he could have stretched more over the back. The collected walk was good. The gelding broke into canter in the transition from walk to passage but Cornelissen was quick to fix it. The zig zag looked a bit messy with balance loss before the second flying change. They scored 7s and 8s for that movement, nonetheless. The two tempi's were good, the one's fantastic, which rightfully earned them a 9. The pirouettes are normally a strong point, but the left one was a bit quick. The final extended trot was very much hand-controlled. The last centerline was beautiful again. Unfortunately this string of small blemishes affected their score and with 77.340% they slotted in fourth in the Aachen Grand Prix.

"I don't know what happened," Cornelissen commented at the press conference. "He never felt so easy before so maybe I forgot to ride him. He's normally spooky so I really have to ride and do more. He was nice and supple and I was just sitting there."

The 2009 Aachen Grand Champion and 2010 double individual WEG bronze medallists Steffen Peters and Akiko Yamazaki's Ravel (by Contango x Democraat) returned to the biggest dressage competition in the world to check where they stand in the new 2011 dressage order. They finished fifth with 77.191% but the judges scored the ride between 74.255% and 79.894%. 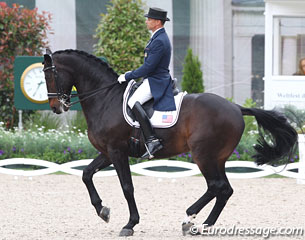 Peters started out strongly with a beautiful halt at entry, highy improved trot extensions with much more self-carriage and wonderful half passes. In the first piaffe Ravel sat deeply on the hind quarters and was slightly crooked in the neck and head looking right. The extended walk was very good, the collected pure. The second passage should have been more engaged but the transitions to and from piaffe were smooth. The two tempi's were big and straight in the body. In the zig zag the change before last was short. The pirouettes were tiny. In the last piaffe at X, Ravel became wide behind. Throughout the test Peters had a fantastic contact with the bit even though Ravel flicks his tongue a bit (but keeps it "indoor"). The effortless of the work was inspiring. Watching a fantastic Grand Prix test and then a horse walking out of the ring on a long rein, with the rider not even holding the reins as he waves to the crowds. That is what dressage is all about! Happy, stressless, high performance athletes!

Back the to 2011 CDIO Aachen index