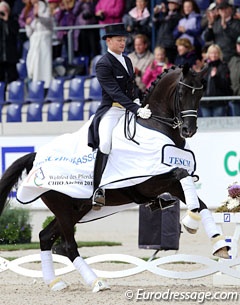 Matthias Alexander Rath and Totilas won the CDIO Grand Prix class at the 2011 CDIO Aachen, leading team Germany to the nations' cup victory. After his performance you could see the joy and relief all over his face: Matthias Alexander Rath won the Grand Prix CDIO with a score of 82.149 percent on the outstanding stallion, Totilas, and in doing so also secured the German victory in the team classification.

“Things got off to a bad start when Anabel Balkenhol had to withdraw after Dablino suddenly went lame while warming up, so we were all the more delighted with the victory,” commented the German coach Holger Schmezer.

In the individual classification, the British dressage Laura Bechtolzheimer claimed second place with Mistral Hojris, ahead of Isabell Werth and El Santo NRW. “Of course after Dablino’s injury the pressure on the German team was immense,” said Schmezer. Christoph Koschel and Donnperignon, who ranked sixth with a score of 73.362 didn’t quite live up to expectations.

“Pepe, as we call him, was almost too well-behaved on the warm-up arena. I should have perhaps geared him up a bit more before entering the ring. He was slightly introvert during the entire test, but it was my mistake. I simply wasn’t aggressive enough and I am annoyed at myself,” reported Koschel. The member of the German team that won the bronze medal at the 2010 World Equestrian Games in Kentucky, also recently came second in the freestyle at the German Championships.

Isabell Werth achieved the second best result for the German team with the Rhineland-bred gelding, El Santo NRW, who is only ten years old. With an overall score of 77.83 percent she ranked third behind Totilas and Mistral Hojris. 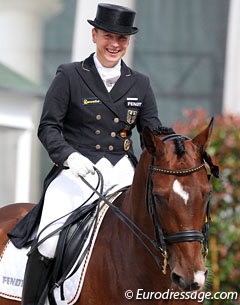 “Isabell gave her best performance with this horse here today. El Santo impressed with his exceptional balance and one can see that he has been allowed to mature gradually,” stated  Schmezer. “Ernie”, as the Ehrentusch son is called at home, has already achieved a considerable amount of victories in the dressage arena, in spite of his young age. He headed the field twice already this year, once in Lingen and once in Dortmund. In 2010 he finished first in Stuttgart, Munich and Mannheim. In 2009 Isabell Werth already won a Grand Prix for Young Horses with the large-framed brown gelding, who she has been riding since he was a youngster.

The “German Dressage Queen”, who is ten-time German Champion, five-time European Champion and who has won gold once each at the individual World Championships and the Olympic Games, as well as securing an incredible amount of Championship medals for Germany, is quite justifiably hoping to earn herself a place on the European Championship team in Rotterdam with El Santo.

The first German competitor in the Grand Prix CDIO, Anabel Balkenhol, had to withdraw. Her horse Dablino injured itself while warming up. Things were supposed to get off to a good start, but unfortunately Anabel Balkenhol, the first competitor of the German dressage team wasn’t even able to enter the dressage ring in the Grand Prix. Her 11-year-old Hanoverian gelding, Dablino, suddenly went lame while doing an extended trot on the warm-up area.

“We let him trot on a long rein once more, but he was still lame,” the national coach reported with dismay. “Due to the new modus of the Olympic Games, the team would be disqualified if only three riders actually compete,” Holger Schmezer added.

Thus, for Anabel Balkenhol, a member of the team that won bronze at the 2010 World Equestrian Games in Kentucky and who came third in the Special in Balve this year at the German Championships, the CDIO Tour has come to a premature end. This will of course weaken the German team, but the team won’t have to withdraw, it suffices if the results of the three best riders are added together, there will simply be no scratch result. So, now everything it was down to Christoph Koschel with Donnperignon, Isabell Werth with El Santo NRW and Matthias Alexander Rath on Totilas.

Nine teams from Germany, Australia, Belgium, Denmark, Spain, Great Britain, Sweden, the USA and the Netherlands were competing in the  Nations Cup. The best 30 riders from this competition qualified for the Grand Prix Special that is taking place on Saturday.