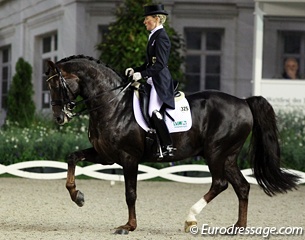 The German  team that is competing in the CDIO Aachen tour will – as long as the riders and horses remain fit and healthy – also be the team that will represent Germany at the 2011 European Championships in Rotterdam in August. However, Isabell Werth, Anabel Balkenhol, Christoph Koschel and Matthias Alexander Rath will not be able to rest on their laurels, because a young pair is close at their heels: With three fifth places Helen Langehanenberg (Havixbeck) and Damon Hill has been standing out behind the quartet at the German Championships in Balve in the middle of June. This evening the pair showed their ambitions to win a place on the team with a victory in the Grand Prix of the CDI Tour.

Langehanenberg triumphed with a score of 73.106 percent ahead of Isabell Werth (Rheinberg/72.915) and the Dutch team World Champion, Hans Peter Minderhoud (71.994) on Nadine. Reserve World Champion, Laura Bechtolsheimer (Great Britain/71.447) on Andretti ranked fourth ahead of Nadine Capellmann from Aachen (70.681) on Elvis in fifth place.

“The riders in the CDI Tour at the CHIO Aachen still have the chance to qualify for a ticket to the European Championships,” said the German coach, Holger Schmezer in the run-up to Aachen. After Ulla Salzgeber announced that she is taking a time-out for private reasons, Helen Langehanenberg is the first reserve behind the quartet from Aachen.

“If I am nominated as a reserve, I will be delighted, but of course I wouldn’t say no to more,” the 29-year-old commented. “In any case we will fight till the very last.” Langehanenberg completed her training at the stables of the Eventing Olympic gold medallist, Ingrid Klimke. She won the World Championships of the Young Horses in 2005 with the meanwhile 11-year-old Damon Hill, who was trained from novice level to Grand Prix by Ingrid Klimke.