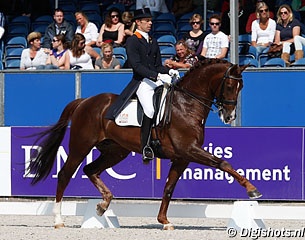 The Dutch Equestrian Federation has announced the Dutch team that will compete at the 2011 CDIO Aachen. Dutch chef d'equipe and team trainer Sjef Janssen made no leaps in the dark in appointing a team mainly based on the riders' performances at the Dutch Dressage Championships.

The CDIO Aachen will be a mini-Olympics one year before the big ones in London. With top teams coming from the U.S., Germany and Great Britain, The Netherlands will have to prove its worth after winning team gold at the last two European Championships and World Equestrian Games.

"To me, the competitions in Aachen and Hickstead are observation trials. No more, no less," Janssen commented. "Many might consider these three with Adelinde and Parzival the strongest team The Netherlands can make at the moment, but you won't hear me say that. I want to keep all options open and only decide after Hickstead on which team we'll be taking to the European Championships. No sooner, no later."