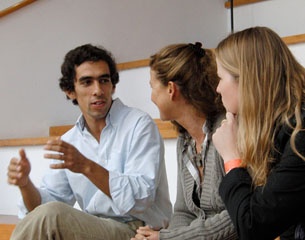 Making the trip all the way from Australia to Portugal to continue my dressage training has proved to be a great decision. Having spent two months shivering in the German winter, the decision was made for many reasons, but most of all I wanted to train in 'the classical way'.

I will describe the method as "Nuno style", in that the sole purpose of training is to ensure the horse is relaxed and forward into the contact, and most importantly is swinging in the back. I know this is the basis to all training, but until this is mastered, everything else is impossible.

I came to Portugal to find my mum a horse, but stayed because I loved the Lusitano horses, and particularly the way they were trained. Luckily I also met Catarina Sande E Castro who happened to know a master at the Portuguese school of equestrian art.

After watching me ride, Catarina and her husband Pedro decided they should introduce me to their close friend, Joao Pedro Rodrigues, who just happened to be the most prestigious trainer in Portugal. From there I was introduced to Joao Pedro's prodigy Gonçalo Carvalho Conchinhas, who needed a rider at the time.

Getting to Know Carvalho

Gonçalo Carvalho Conchinhas is currently ranked number 1 in portuguese dressage, having won last year’s Grand Prix CDI in Saumur, France and competing well in the 2010 World Equestrian Games. Gonçalo is scoring an outstanding 70% in Grand Prix, placing him strides above the rest in his field. 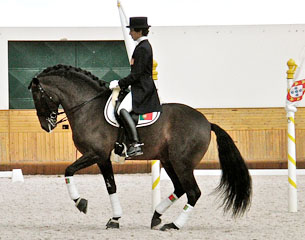 Starting at Gonçalo’s stable was fantastic for a young rider because of his diversity of horses. Each horse was completely different and gave me more opportunity to overcome the different challenges that each horse presents. I quickly learnt that Gonçalo was one of those valuable riders that was not only a brilliant rider and trainer but could actually pass his talent on to others: the rare ‘can do and can teach’ variety.

Everyday Gonçalo helps his three young riders -- myself, Hugo Sousa and Carlos Eloi Ferreira -- training us to be the best riders we can be.
At the same time he improves the quality of his clients' horses, which are kept at the beautiful stable Quinta Dos Cedros, managed by Bruno Carrilho.

Along with the amazing training experience, Gonçalo’s stable also brought on major responsibility. Taking on the role of his trainee I was one of his team left in charge of his 10 client-owned horses, while he took the month long trip to the WEG.

To begin my training I first had to learn to 'do nothing'. It is a german saying, and Ingrid Klimke's favorite riding quote, that "In der Ruhe liegt die Kraft", meaning you find your strength through  quietness. I know now what she means.

So many riders 'bang and crash' about on the horse in hopes of producing something spectacular, when in fact the more still you can become, the more aware you are of what is going on underneath you.

I first had to learn how to feel the horse, to know every thought in his head, and to sense any tightness throughout his body. To do this I had to be completely still, and for a few weeks I felt like a statue of unimportance, establishing a solid position, but not really doing much else. 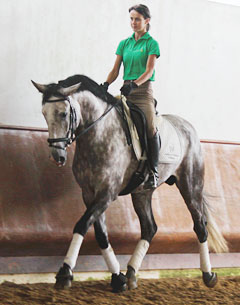 However this was what Gonçalo wanted, and I quickly became aware that through my silence, I had formed a connection with the horse. Gradually, and over many weeks and many horses, I began to feel when the horse was and wasn't working over the back and I developed an ability to respond to the horses will within the split second that he tried to follow it.

It was only then, once I had established the correct seat, and the strength to remain completely silent on the horse, that I was allowed to start really riding him. Gonçalo’s said that until I could learn not to interfere with the horse's natural balance, I would never be able to improve the quality of his movement.

To improve the quality of the gaits you need to make sure you know where the horse is comfortable. At what position of the neck, and speed of rhythm does the horse let go right through his back, allowing him to step up from behind.

The dressage world wastes so much time arguing about where a horse's neck should be during training. Up and out, round and down, roll kur, we have all heard them. Right way, wrong way. Truth is, no one way is the right way. Edward gal confirmed this in his comments at the dressage forum in Portugal where I watched him take 20 minutes to transform a tense horse into a freely moving and stretching horse. He said "Every horse is different." Wow revelation! But it is true. Every horse is different, and so Gonçalo trains every horse in the optimum position for that horse, according to its point of natural relaxation.

Training According to the Horse's Needs

This was difficult to teach me at first, as it is all based on the rider's ability to feel the horse's back. I learnt by doing and by watching Gonçalo undo what I had done. Then one day he no longer had to spend 20 minutes freeing up the horse after I had warmed it up. I developed the sense as to where the horse should work.

The important thing in all this is to NEVER force the horse into position. The correct balance is found through use of the legs and the seat to gradually enable the horse to search for his own contact, let him make the connection with you.

Then every time he "passes the hand" you allow a little more just by "opening the fingers" until he can open in the poll and stretch down without losing the rhythm. 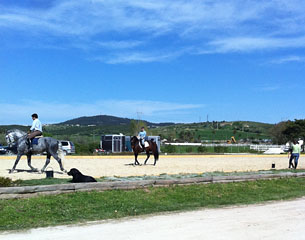 However this only works if you have one crucial ingredient in place. The 'inside leg/outside rein' relationship is the most important to keep the horse straight and connected with the rider's hand. Without this you can never establish balance and the horse will simply fall out through the outside shoulder, with his quarters to the inside, enabling him to lock through the back and have a very easy time of not doing much at all.

You do not need to put the inside leg on. It is there, like a post, reinforcing your position into the outside rein. The outside rein also isn't pulling or working, it isn't back or up, it is just there, ready to catch the horse's weight and maintain straightness as he works himself around your new friend, 'the inside post'.

Once this is established you can test the balance, maintaining the soft link between you and the horse's mouth. If the horse is in good balance and swinging over the back, you can see by the swing that develops all the way to the tip of his tail.

From there everything else is easy. Once you have a horse listening and connected and moving through from behind, the movements are merely additions to the basic work. It's this work that gives the horse its strength. Having established a position and effected use of the aids, I was now ready to begin the more difficult lateral work.

And so training continues, as one of Portugal's best passes on his valuable knowledge to three willing young riders, one of which is all the way from Australia.

-- by Sarah Warne for Eurodressage.com

Related Links
The Road to London is Jumping through Hoops for Some Nations
Rubi, King of Lusitanos, Takes to His Throne