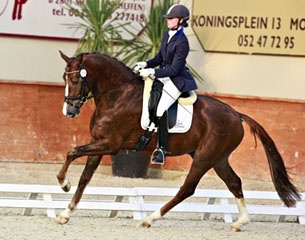 The Belgian young horse circuit seems to be dominated by a solid triumvirate of 4-year old Chopin, 5-year old Bon Bravour and 6-year old Don Massimo. This trio of youngster has been winning every single young horse show which counts as qualifier for the 2011 World Young Horse Championships in Verden, 3 - 7 August 2011.

At this fourth Belgian selection trial for Verden, these three horses booked their third victory of the season putting them firmly in the lead of the provisional ranking. The two highest scoring horses of the season in the 5 and 6-year old division will be picked to represent Belgium in Verden. Three more qualifiers lie ahead: Herentals (11 June), Hulsterlo (19 June) and St. Genesius Rode (2 July).

At the qualifier in Flemalle last weekend, Dominique Mohimont and the Dutch warmblood Chopin (by Jazz x Zepp) won the 4-year old division with 76,605 points. Former young rider Isabel Cool and her liver chestnut KWPN bred Constand (by Vic x Jetset D) were second on 73.645. Mario von Orshaegen and the Hanoverian licensed stallion Lorenzo Lamas (by Laurent x Walhall) were the winners of the first trial in Zandhoven, but in Flemalle they slotted in third with 73.447.

The 5-year old division was won by Tom Franckx-Goen and his Dutch owned KWPN stallion Bon Bravour (by Painted Black x Chronos). These "trophy-thieves" have become unbeatable and with 77,500 points there were well ahead of Dominique Mohimont and the Dutch warmblood Botticelli (by Vivaldi x Koss x Pion) on 75.013. Tom Heyelen and Gucci H (by Gribaldi x Wundermeyer) ranked third with 67.750.

"Herentals will the last qualifier for Bon Bravour," said the stallion's owner. "He already had a busy season and it's time for him to slow down a bit so that the horse can be prepared in all quietness for the World Championships in Verden."

"We're currently second in the provisional ranking and hope that we can keep this spot, so we can go to Verden," Missiaen commented.