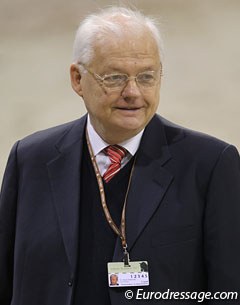 The FEI has appointed Polish O-judge Wojciech Markoswki has been officially appointed Technical Delegate for the 2012 Olympic Games in Greenwich.

"Of course I am looking forward to the job," Markowski told Eurodressage. "I have already had one meeting with the Swiss timing company on the software which we will be using during the Olympics. I am going to the Olympic test event at beginning of July in London, where they will be hosting eventing and dressage."

Markowski has been frequently combining his job as O-judge with that of being Technical Delegate. He was the technical delegate of the first Balkan Championships in 1992 and held the same position in 2010. He was the TD at the 2010 World Equestrian Games in Kentucky, at the two World Cup Finals in Las Vegas, and at the 2005 European Dressage Championships.

Wojciech has judged at all recent major international championships including the 2004 Olympic Games, 2006 World Equestrian Games and the European Championships in 1991, 1995, 1999, 2001, 2003, and 2009 as well as numerous World Cup Finals. He also officiated at the 2010 World Young Horse Championships in Verden.

The Polish Markowski studied at the Marie Curie University in Lublin, Poland, and works at the Department of Physical Chemistry at the Lublin Medical University as profession. He recently celebrated his 64th birthday on 1 June.