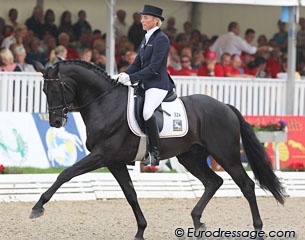 The German Equestrian Federation has set the date for the German selection day for the 2011 World Championships for Young Dressage Horses to be held in Verden. In Germany there is only one trial for Verden and this year it will take place on 21 June 2011

at the official training centre of the German Olympic Equestrian Committee in Warendorf.

Seven 5-year olds and seven 6-year olds will be selected to represent Germany at the World Championships which take place 3 - 7 August 2011. Horses eligible to participate in the trial are those horses which have already scored 8.0 or higher in the Bundeschampionate qualifiers this year or those who have placed first, second or third in an L-level test with a score of 8.0 or higher.  Four-year old finalists of the 2010 Bundeschampionate are also invited.

For the 6-year olds the same conditions count: horses that scored 8.0 or higher in a Bundeschampionate qualifier or horses that have three times placed 1,2, 3 in an L-level test or once in an M-level test with a score higher than 8.0. Five-year old finalists of the 2010 Bundeschampionate are also welcome as well as German participants of the 2010 World Championships.