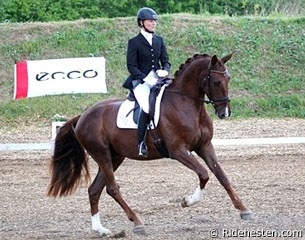 The Danish selection trials for the 2011 World Young Horse Championships have begun with a first qualifier held at the Aabenraa Riding Club on 15 May 2011. Five horses in total scored high enough to move onto the Danish Young Horse Finals held in Broholm 26 - 26 June 2011, where the definite team for Verden will be picked.

The next two regional Danish WCYH qualifiers are held at the Midtsjællands Riding Club on 22 May 2011 and at the Middelfart Riding Centre on 12 June 2011.

The horses which qualified in Aabenraa are:

Back to the 2011 World Young Horse Championship index