U.S. Dressage Championships Set to Return to Gladstone in September 2011 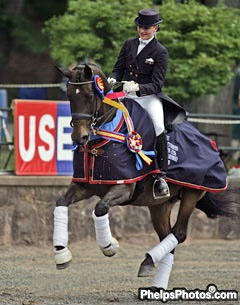 The United States Equestrian Federation (USEF)  announced the dates and location for the 2011 U.S. Dressage Championships (aka Festival of Champions), which will also serve as the USEF Selection Trials for the US Dressage Team for the 2011 Pan American Games.

The competition will be held over four days, September 8-11, 2011, at the USET Foundation Headquarters in Gladstone, NJ.

The best horse/rider combinations in the following divisions will vie for national dressage championships: Grand Prix, Intermediaire I, Young Adult 'Brentina Cup,' Young Rider and Junior. For the first time in 2011, a National Pony Dressage Championship will also be run.

The Intermediaire I National Championship will also serve as the USEF Selection Trial for the US Dressage Team for the 2011 Pan American Games.

The Pan American Games will run in Guadalajara, Mexico in October, the U.S. Dressage Team will be looking to repeat their Gold medal effort from 2007.