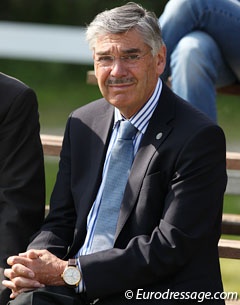 Following the official appointment of the ground jury in November 2010 the organizers of the 2011 European Dressage Championships recently published the names of the judges that will assess the rides at the 2011 Europeans held in Rotterdam, The Netherlands, on 17 - 21 August 2011.

Gary Rockwell (USA) is appointed as reserve judge and will be present at the Championships. The judging supervisory panel will consist of its fixed members Eric Lette (SWE), Uwe Mechlem (GER) and David Hunt (GBR).

The appointments for the 2011 European Championshipwere done it two steps: Approximately 15 months before the event, a long list consisting of a maximum of 12 judges, was appointed (in August 2010). In November 2010 a random draw among the judges on the long list was done, to appoint the actual Ground Jury for the event.