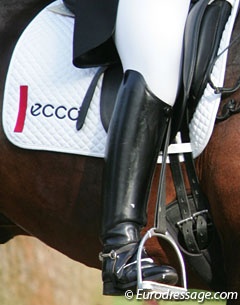 The Danish shoe company ECCO has become the title sponsor of the 2011 European Championships for Juniors and Young Riders in beautiful surroundings at Broholm Castle on 20 - 24  July 201.

"We at Ecco are proud to be able to support Ecco European Dressage Championships for Young Riders & Juniors. The development and support of young people has always been important to us. We believe that we through our support of national, as well as international competitions, can contribute to the development of the existing great talent in Danish Equestrian sports. That is why we are happy to be able to create the best conditions for the holding of Ecco European Dressage Championships for Young Riders & Juniors in collaboration with JBK Horse Shows,” said Morten Lauge Jensen, head of Ecco’s marketing development.

“Ecco has had enormous significance because of their support of Danish equestrian sports in recent years. Especially their support of the young Danish dressage riders and their development, has had great importance for the present positive trend in the sport.
The fact that ECCO now emphasize their commitment to equestrian sport by being the principal sponsor of an European Championship on Danish soil also helps to secure that Denmark can make a name for itself internationally,” said Jens Trabjerg, manager of JBK Horse Shows.

Strong nations will be participating

The preliminary entries for the Ecco European Championships for Young Riders & Juniors have started to arrive. The two medal-winning countries from last year’s European Championships: Germany and The Netherlands have announced that they intend to defend their medals. Belgium, Spain and Great Britain have also announced their participation in the championships in advance. Thus, some of the traditionally strongest equestrian nations will be ready when Broholm opens the castle gates for the cream of European youth riders' top.

46 nations have been invited, so the Danish riders will have to fight all the way to the medals. However, Danish dressage-talent has been developing rapidly in recent years, and at last year’s FEI European Dressage Championships for Young Riders & Juniors, Denmark took no less than 5 medals. So expectations of the Danish dressage riders are high.