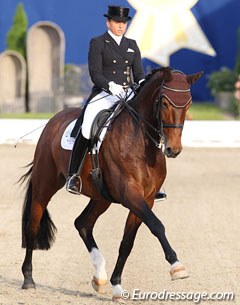 Dorothee Schneider and Gabriele Kippert's 10-year old Westfalian mare Forward Looking won the first Tesch Inkasso Cup qualifier for upcoming Grand Prix horses (age 8 - 10) at the 2011 CDI Hagen Horses and Dreams competition. Winning the warm up class Intermediaire II with 75.000% and the young horse Grand Prix class with 77.050%, Schneider and Forward Looking were a league of their own keeping all competition far at bay in the ranking.

The 10-year old Fidermark x Dinard L mare appeared extremely confirmed in the Grand Prix work with a superb passage, a lovely sitting piaffe, and beautiful pirouettes. The transitions between piaffe and passage need to be a bit stronger and in the one tempi changes the mare got a bit tense in the back, but overall she was light in the contact and totally obedient to the rider's aids.

The Framersheim based Schneider was ecstatic about her double victory. "Since I have know this mare, she's always been fun to ride. I got the mare in my stable when she was four and we immediately had a spark going. I've never had a horse that has so much potential for Grand Prix," she commented.

Schneider qualified for Forward Looking for the 2006 and 2007 Bundeschampionate Finals in Warendorf. In 2009 she was injured and had a 9-months break. In 2010 the pair qualified for the Nurnberger Burgpokal Finals and finished fourth in last year's upcoming Grand Prix horse championship finals in Munster (at the time named Medien Cup instead of Tesch Inkasso Cup). 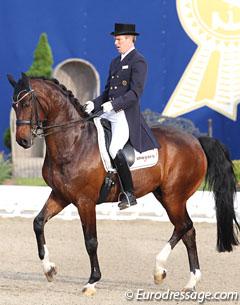 Olivier Oelrich and the 9-year old Hanoverian Floris (by Furstenreich x Rockwell) placed second twice with 71.105% in the Inter II and 74.300% in the young horse Grand Prix. Oelrich, who is the team trainer for the German youth riders, presented Floris in a wonderful way. The combination was calm and collected throughout the test which led to a very friendly and appealing silhouette. The passage is regular but in piaffe the horse certainly needs to sit, taking more weight on the hindquarters. The extensions were ridden conservatively in the first round, but had more expression in the second test. Overall Floris is a horse with much potential for the future and stands out with his rideability.

German WEG team member Christoph Koschel saddled his star for the future Rostropowitsch, a 9-year old Westfalian by Rockwell x Coriograf B, and placed third twice with 70.474% and 73.550%. The charming dark bay stallion has a super extended trot and is very powerful in canter, but the horse lacked a bit of natural forwardness in both the passage and piaffe. Once the horse gains more strength, his balance and ability to collect more will improve.

Dorothee Schneider also finished fourth with Sven Rothenberger's 9-year old Dutch warmblood stallion Van the Man (by Obelisk x Landjonker). The black stallion stands out with his incredibly buoyant suspension in trot and passage, but in the piaffe the horse lacks lift in the shoulder and overall could have more expression in the front leg. He was professionally presented by Schneider who had the horse nice and constant in the frame, despite a few minor spooks on the short side at A in the Intermediaire II. The pair scored 69.684% and 72.550%. 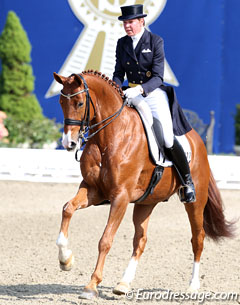 Birgit Finken made a solid impression aboard the long legged but thoroughbred looking Liostro, a 9-year old Hanoverian stallion by Le Primeur x Wenzel I. The horse is narrow in the chest and could be muscled more, especially for a stallion, but his sweet expression and clear Grand Prix talent make him an eye-catcher in the ring. He has an elegant piaffe and passage but lacks some suspension in the trotwork. In the Intermediaire II he became quite tense in the canter and lost scope and ground cover in that gait, which resulted in flat pirouettes. Nevertheless the horse has good potential and he scored 67.211% (6th) and 71.300% (5th).

A much talked-about horse in the 2011 Tesch Inkasso Cup was Stephan Koberle's 10-year old Oldenburg gelding Darjeeling (by De Niro x Kennedy) which was initially bought by Martin Schaudt at the Klosterhof Medingen auction. The horse has a fantastic trot and stunning piaffe and passage. In the piaffe he sits incredibly deep and becomes tight at the base, almost kicking his front feet off the ground with his hind hooves. This paire scored  66.368% (9th) and 71.050% (6th).