Connaisseur and Cover Story Approved by the KWPN Society 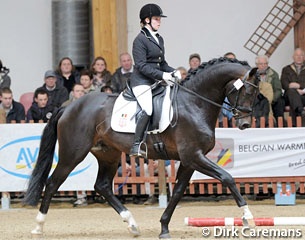 Canadian owned Connaisseur and KWPN licensing champion Cover Story have been accepted for breeding for the KWPN society following their 50-day stallion performance test in Stegeren, The Netherlands, which concluded today 4 May 2011.

The Hanoverian branded but Westfalian, Belgian warmblood and Swedish warmblood approved Connaisseur is now also licensed for the Dutch warmblood society. Owned by Sara Pocock of Character Warmbloods in Canada, the dark bay stallion by Con Amore x Donnerhall scored 82,5 points in total and received 8s for walk, trot, suppleness and 8,5 for canter, self carriage, rideability, and character. The selection committee believes that Connaisseur will be a good choice if breeders want to improve the canter and rideability.

The way to achieving that official approval has been a hard one for Cover Story, who totally struggled to live up to his title as licensing champion. The bay Oscar x Corleone attempted twice to complete the Stallion performance test before but dropped out because of performances below par and health issues. This time the 4-year old Cover Story made it to the finish line with a score of 75 points. He got 8,5 for canter and 7,5 for walk, self carriage and dressage potential. For trot, suppleness and rideability he got 7. The committee believes that this stallion can improve conformation and the canter. The final report noted that Cover Story cribs in his stall.