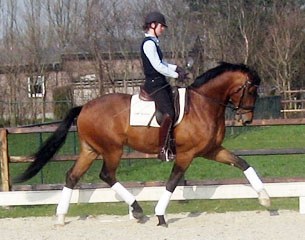 The group of horses in the running to become official Dutch representatives at the 2011 World Young Horse Championships has enlarged after the second observation trial held on Tuesday 19 April 2011 at the KNHS headquarters in Ermelo, The Netherlands. Horses that were absent on the first trial - Borencio, Bretton Woods, Avatar, and Astrix -- due to illness of their rider or injury have now been reviewed by the committee and accepted for the next round.

All combinations which have initially qualified for the second trial were also accepted to come back for the third by the selection committee (Wim Ernes, Johan Hamminga and Gert van den Hoorn). This next session will take place on Tuesday 26 April 2011 in Ermelo.

Several horses were absent at the second trial but they should return again next week. They were Andretti (by Special D), Amazing Star (by Flemmingh), Aaron (by Florencio), Aston Martin Nl (by Uphill) and Anne Beth (by Uphill).