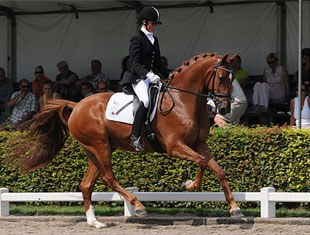 The Dutch selection trials for the 2011 World Championships for young dressage horses kicked off on 5 April 2011 with a "Wild Card" day in which horses could participate and earn a place in the official Dutch selection process for Verden. Four horses were able to earn a wild card, but only one was selected for the project.

The best 30 horses from the 2010 Pavo Cup as well as the winners of the regional Pavo cup selection trials and 5-year old finalists of the 2010 World Championships are automatically qualified to participate in the Dutch WCYH selection trials. The five best horses of the KNHS Subli Championships have also been invited. However, the wild card day was organized for owners and riders with talented youngsters which were not competed in 2010.

Former Pavo Cup champion TC Athene (by United x Jazz) was the only one to impress the selection committee sufficiently. Wim Ernes, Johan Hamminga and Gert van den Hoorn selected Athene as sole horse of all 5 and 6-year olds that appeared in Ermelo on the wild card day.