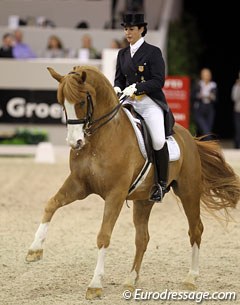 With her eighth place finish in the final qualifying competition of the 2010/2011 World Cup Dressage Western European League at 's-Hertogenbosch, American Catherine Haddad celebrated her birthday and secured herself a trip to the Final with Winyamaro.

The pair scored 74.100%, to lead at the halfway mark through the Freestyle, but ended up eighth in 's-Hertogenbosch with another impressive effort in the toughest World Cup Qualifying League. Haddad (Vechta, Germany) has strung together an impressive list of World Cup efforts with the 11-year-old Hanoverian gelding (by Walt Disney I) and earned fifth place in the Western European League Rankings. Good results throughout Europe punched her ticket to Leipzig for the Final April 28-May 1, 2011.

The final North American League qualifier will be held this weekend, March 31-April 3, at the Festival of the Horse CDI-W in Burbank, CA, and two American riders will be named from that League to represent the U.S. in the Final.

Back to the 2011 World Cup Finals index