Ricky MacMillan on Half Marks and Home Bred Horses 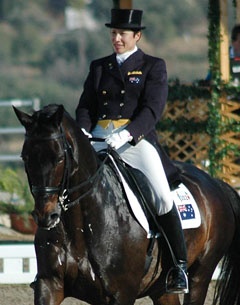 Like all FEI competitions, the judges for the 2011 Sydney CDI 3* will be able to use half marks. From the 1 January, 2011, judges can also give scores of 0.5 to 9.5. Australian Olympian and 4* International judge, Ricky MacMillan said, “This innovation allows judges to refine their judging further and be more precise.

A movement that was not an 8 but that was a “good 7” can now be a 7.5 and not a 7. Hopefully, judges will be using half marks for national competitions in Australia in 2012”. On some international dressage websites it has been reported that the ‘half-mark’ hasn’t been used a lot to date by many international judges. It will be interesting how many are used at the Sydney CDI.

Another interesting issue, which has been raised in the Australian dressage world is that it has only been in the last 10 years that Australia has been competing on top quality horses, suggesting they were bought from overseas or bred via artificial insemination of horses based in Europe. Does that mean that our horses bred by stallions standing in Australia aren’t good enough to succeed at this level? Australia’s best performed international horse at the 2010 World Equestrian Games, Victory Salute, proves this may not be the case. You have to ask, will it be the imported horses that win the competitions at the Sydney CDI or will it be horses bred by an stallion standing in Australia?

I asked Ricky her thoughts on this and also if an accurate horse can still beat a ‘big moving’ horse? “It’s not just in Australia that breeding is progressing, it’s all over the world”, said Ricky. “We are seeing more wonderfully talented horses being bred across the world and we are also seeing well trained horses produced by more talented trainers and riders. A talented horse that is well trained will place ahead of a normal horse with average training. The judge marks each movement, according to the criteria, as it is performed on the day. No consideration is given to future potential. So the normal but well trained horse may have the same final score as the more elastic horse making some mistakes. If anything, correct training will be rewarded more highly”.

Ricky feels that the Sydney CDI will be a great opportunity to see the new young riders and horses emerging into the competitive ranks. Ricky said, “The Young Horse Competition will also provide the Australian breeders feedback on their efforts in producing horses suitable for top sport”.

Another important issue discussed was about the relationship between the rider and judge. “There is sometimes comments that judges and riders might have more respect for one another”, said Ricky. “Recent changes to the training of judges and the process of judging are aimed at improving respect for judges and the sport of dressage”. Ricky’s personal view is that judges who have competed themselves and judges who have trained horses and riders are likely to have a genuine empathy with, and respect for the riders. Regardless, it is clear that athletes deserve respect, for they are what the sport of Dressage is about”.

After discussing these topics with Ricky MacMillan, it was quite apparent that Australian dressage is working hard to access all the wonderful initiatives and programs which make the sport of dressage an even playing field. Because of these initiatives, the Sydney CDI will help shape not only a more accurate scoring system but it will also promote a healthier relationship between judges and riders; it will nurture Australia’s young riders and also the horses that show potential.

Make sure you are a part of this great event. It is an event that will help shape dressage in Australia. All information about the Sydney CDI3* can be found at www.sydneycdi.com