Ricky MacMillan on Judging and Dressage in Australia 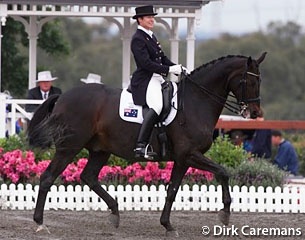 Ricky MacMillan is well known to the Australian dressage community and still holds a Sydney CDI record score for the 2004 Grand Prix Freestyle. After spending more than 25 years as a national judge and having a career as a rider that took her to two Olympic Games and two World Championships, Ricky became a 3* accredited judge in 2008 after completing a formal examination in Spain. This followed three years, during which she participated in overseas seminars and practical training including shadow judging.

Ricky’s first appointment as an international judge was in Germany in 2009 and since then she has continued to judge in Europe, North America, Japan and Australia. In 2010, Ricky completed an examination in Denmark to become a 4* International Judge. When asked about this achievement, Ricky said, “I feel very fortunate to be one of the first graduates of the new and expanded FEI system of training judges. I received support and mentoring from foreign 5* judges and am incredibly grateful to them all, including Dieter Schuele who is judging at the Sydney CDI. I am especially grateful to Mariette Withages. Her dedication to the future of the sport of Dressage is nothing short of amazing.”

Around the world, many dressage riders are frustrated by the difference in scores from the judges. This issue has been the main discussion at many dressage forums and many initiatives have been implemented to address them. Ricky gave a thorough overview of how it currently works. “Judges sit and score independently. Each judge sits at a different place around the 20 metre x 60 meter arena. This system enables an overall score to be given to each competitor which reflects different qualities of the performance. For example the carriage or shape of the horse is often seen more from the side view while the straightness and the way this relates to balance is often seen more from the front view. During each athlete’s performance, each judge will see some of the movements performed from the side, from in front, from behind and even from an oblique angle. Depending on the competition, each judge may give up to 40 scores out of ten, and remarks per athlete in about six minutes. All the scores, from each judge sitting at a different part of the arena, are added to give the final score per athlete. When the total result differs by more than 5%, the judges always discuss why this occurred and work to better correlate their judging through gaining an understanding of how their colleagues evaluated this performance.”

As the Sydney CDI is nearly twenty years old, we have to ask how Australia is in regards to the development of dressage and what needs to be done to ensure Australia keeps moving forward? Ricky feels Australian Dressage is taking part in the worldwide development of the sport. Riders are working cleverly to improve their own abilities. Australia now has more and better show and training venues than ever before. Ricky said, “Lately, it has been exciting to see riders becoming involved in organizing high level shows. We continue to see athletes train overseas and also to return and lift the standard at home. We must continue to support our existing shows to continue to build on their solid foundations, while also encouraging new shows to forge new pathways for the sport. We must continue to support athletes travelling overseas, with their horses, to train and to compete and also to bring world’s best trainers and riders here for clinics. We also must support our schools, pony, junior and young riders and continue to integrate their competitions and training pathways with those of our senior and elite athletes. In the future, we can look to embrace the training of beginning riders and also to embrace horse breeding under the banner of Equestrian Australia.”

Ricky coaches in various centres around Australia although she is careful not to coach any athletes that she may judge, according to FEI and EA rules. Ricky still rides although she has not competed in Australia for almost six years. She currently has a couple of horses in Europe and also in Australia and enjoys riding them when she can.

The Sydney CDI 3* will commence on the 28 April 2011. It will be held at the Sydney International Equestrian Centre, which was built for the Sydney 2010 Olympic Games. There is a Grand Prix class on all three days that makes it a wonderful long weekend for all dressage fans.