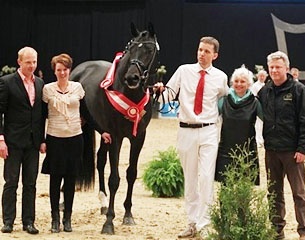 Spokesman of the licensing committee Poul Graugaard praised the collection of colts in Herning as the best he has seen during the entire season throughout Europe. Particularly, the dressage stallions stood out in a league of their own

Among the 24 approved colts the judges selected eight stallions for the premium ring Sunday: three jumper stallions and five dressage stallions. The jumpers included two German bred ones and one Danish bred, whereas one dressage colt was Dutch and four were Danish.

From Auction foal to Champion

The stallion station Højagergård had immense success at the stallion licensing presenting three colts of which two got approved, one of which became premium colt and the other champion.

Champion dressage colt ERA Dancing Hit and premium dressage colt Tailormade Attention were among the top priced foals at the Danish Warmblood Elite Foal Action in 2008 and both proved to be wise investments.

ERA Dancing Hit stood out as a highly modern colt with three excellent gaits, very correct legs and a good character. His sire UNO Don Diego is out of the same dam as the World Champion dressage mare UNO Donna Unique.

As champion among the jumping colts the judges selected Cavall Ask, which stood out with his attractive type as well as his display of superb jumping skills and functionality in every aspect. Cavall Ask was a premium colt in Oldenburg and was sold at auction to Stutteri Ask.

The 24 approved colts have to pass a 10-day observation test at Vilhelmsborg where they are tested for their temperament and behaviour. The 10-days test begins Monday 14th March and once the colts have passed the test the can commence their first breeding season.

Back to the 2011 Danish Warmblood Stallion Licensing index