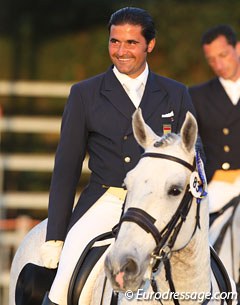 Spanish WEG team rider Jose Antonio Garcia Mena and his 11-year old Andalusian stallion Norte brought dash to the arena winning the Grand Prix on Saturday 5 March 2011 during the first week of competition at the Sunshine Tour CDI at Montenmedio Equestrian Centre in Vejer de la Frontera, Spain. The weather was dry and windy and with a sun fighting to ray through the clouds, a wonderful scene was set for the first Grand Prix class of the week.

The sympathetic Garcia Mena showed off the excellent paces of Miguel and Enrique Lovera's Norte (by Cortesano VI out of Iluminada VI). The grey stallion is one of those PRE's with large movements and suspension more comparable to top warmblood horses. Norte has beautiful front leg usage with amazing stretch and reach, which he shows off well in the trot extensions. The half passes were beautiful but there was a slight loss of rhythm in the switch  at B. The horse has buoyancy in the passage and sits well in the piaffe. In canter the horse became a bit hectic which led to mistakes in the one tempi's and an unbalanced pirouette left but in general top potential is certainly there in this gorgeous combination. 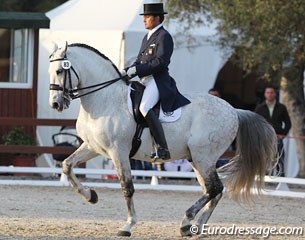 The judging panel, consisting of Christoph Umbach (LUX), Peter Holler (GER), Wojtek Markowski (POL), Francisco Guerra Diaz (ESP) and Maribel Alonso (MEX) awarded 30-year old Garcia Mena 70,745% which sufficed for the victory in the opening Grand Prix of the 2011 Sunshine Tour. Garcia Mena was the last rider to go in the class and referred Irish Judy Reynolds and the 13-year old Dutch warmblood Remember (by Careful out of Ujolein) to a second place. Reynolds held the lead almost to the very end but her score of 69.255% ended up being the second best mark.

Trained by Johann Hinnemann, the young Irish rider produced a very polished test. The trot work was solid, but in passage the bay gelding pushed himself high and hollowed his back slightly. The one tempi's were gorgeous and the extended canter powerful and ground covering followed by a huge flying change.

"Now we're starting to show what we can do," a very pleased Reynolds commented after her test. "It would have been 70+ but for the spook at the start of the zig zag. This has been a great start to my 12 month campaign. Between now and next March I will be fighting not just for Olympic qualification but also an Olympic starting place, so the scores in that regard are even more important than the results. I hope the next couple of weeks here will be just as good." 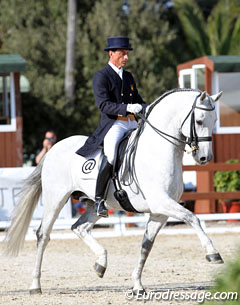 Laura Aguilo and the drop dead gorgeous 10-year old Iberian bred stallion @Hierro finished third with 68,872. Hierro is very interestingly bred, sired by KWPN keur stallion Ferro out of PRE mare Babieca XII (by Binguero), and owned by Arroba Granaderia. The horse was quite tense and spooky throughout the test and his rider had to visibly spur the horse forwards, which meddled with the harmonious total image.

The grey stallion has beautiful gaits, nonetheless, and is less hectic than the majority of Andalusians seen in the competition ring at the Sunshine tour. He has nice lift in the shoulder and shows good potential in the piaffe and passage. There was mistakes in the two tempi's but the well regulated zig zag was the highlight of the test.

Portuguese WEG team rider Mafalda Galiza Mendes and her Westfalian chestnut gelding D'Artagnan (by Delphi) incarnated elegance in the arena. This expressive pair rode beautiful piaffe and passage work, though the passage should have been at times a bit more forward. Galiza Mendes struggled a bit with the one time tempi's which lacked ground cover. With 68,468% the Portuguese duo slotted in fourth.

The German based Spaniard Juan Manuel Vidal Testal took over the ride on Pedro Hermosilla's Bavarian warmblood Gachino from Christilot Boylen a year ago, and finally seems to have come on the same wavelength with his horse. The 17-year old black gelding is very confirmed in the Grand Prix movements and the pair flaunted lovely trot half passes, big tempi changes and small pirouettes. The horse looked a bit sour though in the collected work and did not execute the required amount of steps in the first piaffe. Their score got stuck at a still promising 68.021% which ranked them fifth. 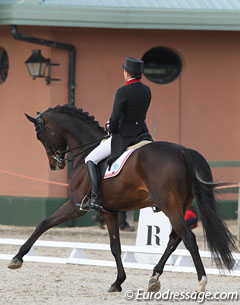 2011 could be the year of the big international break through of Austrian Nora Motwurf and her 16-year old Danish warmblood stallion Milan (by Michellino). Formerly based in Graz, Austria, the 33-year old rider has launched her international career in style at Montenmedio finished sixth in the Grand Prix with 67.617%. The Spanish judge even put her first with 72,447% while the other four had her at an average of 66%. The pair radiated confidence and familiarity with the GP test. Milan was always forward and willing to work but his trot is a bit stiff in the front leg, lacking freedom in the shoulder and lift in the forearm. There could have been a bit more sit in the final piaffe but in general the test was clean and smooth.

Jose Daniel Martin Dockx brought five horses to the Sunshine Tour, four of them to compete. Aboard Kim Boyer's 9-year old PRE stallion Encanto XI (by Evento out of the late Cantora XVI) the charming pair placed seventh with 67.021%. The duo is one of the rising stars in Spain having became regional small tour champion and national reserve champion in the developing horse class in 2010. Encanto's youth and inexperience at Grand Prix level were still obvious in the test as he needed to have more strength to stay balanced in the piaffe. Nevertheless the lovely sit and expression were there.

Austrian Astrid Neumayer and her cute 11-year old bay Holsteiner gelding Everglade (by Exorbitant) achieved their first international Grand Prix placing with their 8th spot and 66.979% score. The trot work was full of energy and bounce. The passage was delightful but in piaffe the horse should have more spring. The zig zag was a bit shabby and the one tempi's could have been more ground covering, but the pirouettes were lovely, especially the one to the left.

"Slowly but surely Gladdy is becoming a more secure Grand Prix horse," Neumayer commented. "With highlights in the passage and pirouettes we were able to score highly in the Grand Prix." The score differences were huge with this pair: 69,574 from judge Holler and 63,511% from judge Alonso. "It's a pity the judges couldn't agree, but that's dressage," Neumayer quipped. 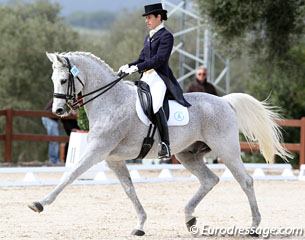 Gema Martin Alcaide brought a splash of colour curiosity to the show ring by saddling her fleabitten 15-year old Baden Wurttemberger gelding FBW Hidalgo (by Heraldik xx x Wettstreit). The grey gelding is not prince charming with his high hip and croupe and thinly muscled thoroughbred neck, but his adorable face and fantastic work ethic make the pair more than fun to watch. The passage was lovely and the horse keeps giving his all for his rider despite his propelling tail. The judges rewarded her test with 66.660%.

Cologne based German Christian Brühe and his 12-year old American bred Holsteiner gelding Cinco de Mayo (by Coriander x Alcatraz) completed the top ten with a 66.170% score. The dark bay gelding is a powerful horse who well takes the weight on the hindquarters in the piaffe but slightly crosses over in front. The passage is full of potential but needs to be a bit more even. Brühe takes up a heavier contact with the bit in the canter work which is a pity as the horse gets tighter in the neck and sometimes behind the vertical. Nevertheless, the combination showed clear promise and Cinco's potential for the Grand Prix work is obvious.

Related Link
On the Scene at the 2011 Sunshine Tour CDI