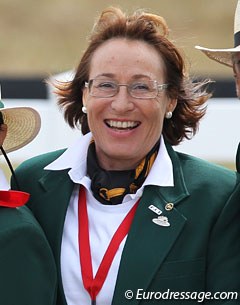 After the death of Klaus Rheinberger, the foundation supporting German youth riders - founded by Rheinberger's late wife Liselotte Schindling-Linsenhoff - will be continued under the auspices of renowned German judge Dr. Evi Eisenhardt.

German journalist Dieter Ludwig reported that Rheinberger had stipulated in his will that Dr. Evi Eisenhardt would continue to foundation, which sponsors the Piaff Forderpreis for German Under 25 Grand Prix riders as well as the Otto Lörke Preis for the most successful German young Grand Prix horse of the year.

Rheinberger made his name running a shoe company between 1953 and 1982. The company with 2,500 employees produced the famous Rheinberger shoe and manufactured 1,6 million shoes per year. In 1996 the company closed when the shoe market was taken over by Asian companies.

Rheinberger married Liselotte Schindling in 1981. She was the first female Olympic Dressage Champion, having won gold with Piaff at the 1972 Munich Olympics. Between 1950 and 1975 Liselotte was first married to Fritz Linsenhoff and the couple had a daughter together, Ann Kathrin. Later on Rheinberger and Schindling moved to Juan-Les-Pins near Antibes, France, while Ann Kathrin stayed at Schafhof in Kronberg, Germany. 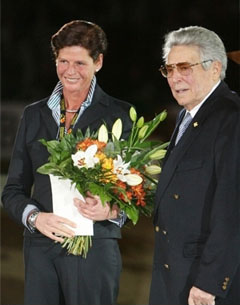 Throughout her life Liselott Rheinberger-Schindling tried to "give back to the dressage sport what it gave me," she once said. She established a foundation which financially supported German dressage riders by covering their hotel fees, training, etc at major championships. She also sponsored the Piaff Forderpreis and Otto Lorke Prize.

After Liselott died in 1999 Klaus Rheinberger took over the management of her foundation and gave back even more. He helped renovate the Schindling family's old VDO factory, which is now a scientific centre, by cintrubuting one million euro and he also gave a million to the Kronberg zoo.

The last few years Rheinberger spent in the company of Christa Haug, widow of German dressage champion Wolfgang Haug. Anton Fischer (86), former long-time chef d'equipe of the German dressage team and director of the CHIO Aachen until 1998, was Rheinberger's close friend. "Two days before his death we had a phone call and everything seemed alright. We were already making plans for next month," Fischer told Dieter Ludwig. Fourty-eight hours later Rheinberger passed away in Juan-Les-Pins.