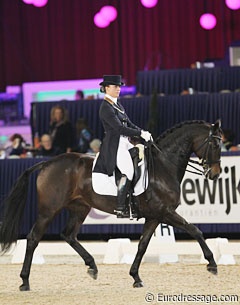 The Belgian Equestrian Federation has announced the criteria for team selection for the 2011 European Pony, Junior and Young Riders Championships which are held in Jazkowo (Poland) and Broholm (Denmark) in the summer this year.

"On 22 February we had a very constructive meeting with the riders, parents and trainers," Belgian youth riders' chef d'equipe Laurence van Doorslaer told Eurodressage. "Together with Jeroen van Lent, chair of the national dressage committee, we have notified the riders of a few changes in the FEI and national regulations. We also discussed the 2011 selection criteria."

The team is based on the results of the riders after the chef d'equipe has made a recommendation for team constitution. The results as well as the performance level during team nomination will be taken into account. In case of doubt between team candidates the national dressage committee can decide to send the candidates to an extra show. In that case the committee can also take into account the sportmanship of the candidates and their personal team.

Recommended competitions to obtain the CDI qualification scores are:

Training seminars will be held begin March and mid April (test riding in front of an international judging panel) and probably another one round 7-8 July to prepare for the European Championships and to do team building.

The youth riders will also be divided into A, B and C teams. This 2011 team selection will be determined by the results achieved in the individual test. As of 1 Apri 2011, the riders have to gain the following scores in a period of 4 months:

To be considered on the European Championship team, one does not necessarily have to be an A-team rider, but the fitness of the combination as well as the sportmanship of the rider and his crew will also be determining for team selection. The National Dressage Committee has the decisive verdict in this matter.

A few new combinations or older combinations which have moved up the levels have already proven their form at national shows and will be aiming for CDI selection: