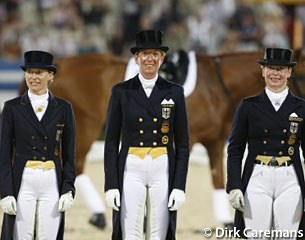 The Olympic Opening Ceremony on 27 July will be followed by 12 days of equestrian competition, with the world’s best athletes competing for six gold medals in the Olympic disciplines of Eventing, Dressage and Jumping. The equestrian events all take place at the stunning Greenwich Park venue. Britain’s oldest Royal Park and a UNESCO World Heritage Site, Greenwich Park is just 12 minutes from the main stadium.

Eventing opens the Olympic equestrian events on 28 July with two days of Dressage, followed by Cross-Country on 30 July and two rounds of Jumping on 31 July to decide the Team and Individual medals

Dressage gets underway on 2 August with two days of Grand Prix competition, which forms the first qualifier for both the Team and Individual. The top seven Teams and 11 best-placed Individuals go forward to the Grand Prix Special on 7 August, which will decide the Team medals. The Freestyle to Music to decide the Individual medals takes place on 9 August.

The first qualifier in Jumping will be on 4 August, followed by the two-round Team decider on 5 and 6 August. Team medals will be presented on 6 August. The two rounds of Jumping to decide the Individual champion will be held on 8 August.

The FEI has worked closely with the International Olympic Committee and LOCOG on the Equestrian schedule to give the Olympic Broadcasting Service (OBS) and international media the opportunity to maximise coverage of the equestrian disciplines, which will benefit equestrian sport globally.

Details of other nations that qualify for London 2012 will be available following the completion of the 2011 qualifiers.

The number of athletes per discipline is as follows:
Dressage – 50 athletes (4 per NOC)