Roffman Invited for 2011 Aachen Under 25 Competition 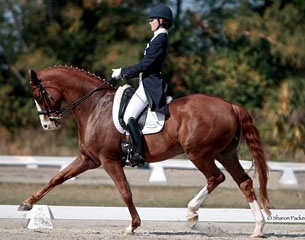 American rising Grand Prix rider Caroline Roffman has been invited to participate in the Under 25 competition held at the 2011 CDIO Aachen in Germany on 13 - 17 July 2011. After its successful inauguration in 2010, the Under 25 competition will be repeated this year and provides an opportunity for young Grand Prix riders to get exposure and experience in the most prestigious show arena in the world.

The United States Equestrian Federation (USEF) has recently received an invitation from the Organizing Committee of CHIO Aachen to send riders to participate in the CDIU-25 for the first time. Caroline Roffman (Wellington, FL) received an invitation to participate as an individual starter and the U.S. also has the opportunity to send up to three additional Under -25 riders to compete at this prestigious event

Roffman's participation was approved by the Dressage High Performance Committee.  The Committee will review further interested riders who would like to put their name forward. Please submit requests or interest to the USEF Dressage Department, Attention Jenny Van Wieren

"I have always dreamed of riding internationally as well as riding at Aachen," said Roffman, 22. "The program Mr. Kemperman (Chairman of CHIO Aachen) has created is wonderful and will allow me as well as other riders in the future to get a taste of international competition at the Grand Prix level. I am both honored and astounded to be able to participate in this event. I hope that this becomes a tradition for other US young Grand Prix riders and helps to pave our way to large tour success down the road."

Related Links
Belgian Sensation Continued: De Deken Stays Ahead in Aachen Under 25 Competition
New Competition for Under 25 Riders at 2010 CDIO Aachen
Caroline Roffman Kicks Off the New Year by Competing in and Winning the Young Rider Grand Prix