Quite Easy, Most Successful Breeding Sire in Sweden in 2010 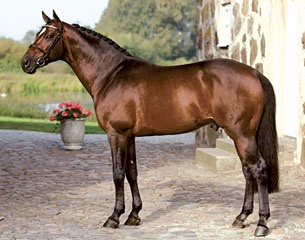 The dark bay Holsteiner stallion Quite Easy is Sweden's most successful breeding sire of 2010.The sire totalled 72 points in the Breeders' Trophy ranking and topped the field with a huge point advantage due to his versatility.

The 16-year old Quite Easy (by Quidam de Revel x Landgraf I x Capitano) is bred by H. Thormahlen in Germany, owned by Haras de Brullemail and stands at stud at Flyinge. His offspring was most dominant in dressage, show jumping AND eventing, which led to his huge point total of 72 in the Breeders' Trophy ranking.

"He's a very versatile sire in the sense that he produces good jumpers and dressage horses. He has been very important for Swedish breeding and can be regarded as unique. It is difficult to find such a complete stallion," said Christina Olsen.

The second highest ranked stallion is the Holsteiner Cardento (by Capitol I x Lord) with 23 points. The best scoring dressage sire in Sweden is the Hanoverian licensed Riccione (by Regazzoni x Arogno x Bolero) who earned 21 points and also finished third overall.