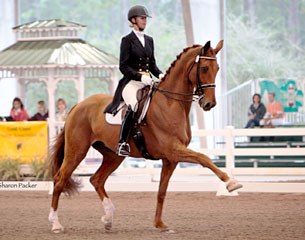 U.S. Grand Prix rider Heather Blitz and her 8-year old Danish Warmblood gelding Paragon won the Prix St George (75.746%) and the Intermediare I (73.5%) at the Gold Coast Opener CDI-W in West Palm Beach, FL, in their first show of the season beating strong fields each of 36 competitors. This double-header gives the pair two-thirds of the qualification required already for the 2011 U.S. Dressage Championships later this year.

Paragon is a U.S. bred Danish warmblood by Don Schufro out of Pari Lord (by Loran) and was born at Richard Freeman Jr.III's Oak Hill Ranch in Louisiana, USA. Heather was ecstatic with the way her young horse carried out the tests this weekend.

"This was Paragon's best performance so far," she said. "He was as honest as possible and did exactly what I asked of him. I pushed for a bit more in the Intermediare 1 and he really responded well. The test was full of wow moments and things that gave me goose bumps! We need one more score towards qualification for Nationals and then I'll think about starting the Intermediare 2 with him this spring."

Their performances attracted a crowd and drew compliments from across the dressage community at the Jim Brandon Arena.

"It makes me very proud to see people's reactions to Paragon as I have had a very special connection with him since the day he was born and his training has always been a real joy," continued Heather. "He has a wonderful work ethic and really likes to show off and that combined with a wonderful temperament makes my job easy. While I've had some good and some great horses in the past, I feel that Paragon has already surpassed expectations, especially since he is still relatively young for what he has achieved."

The combination's next competition will be at the Wellington Classic Dressage Spring Challenge on 11 - 13 February 2011.