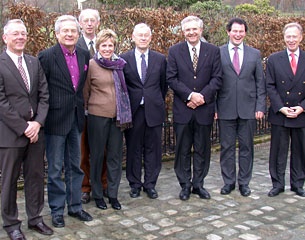 The German Dressage Judges Association organized a seminar for German Grand Prix judges at Ann Kathrin Linsenhoff's stable in Kronberg, Germany, on 14 and 15 January 2011. Taking place for the second time since the inauguration of the seminar in 2006, the event was an overwhelming success

and stressed the need for judges to meet and discuss.

"We sent out 70 invitation and got 72 people registering to attend," said Dieter Schüle, who chairs the German Dressage Judges Association. The seminar was directed by Schüle and German chef d'equipe Holger Schmezer.

The speakers divulged on their themes and put words into action by scoring movements shown on video. These marks were discussed and analysed by all judges, riders and trainers present.

The seminar continued on the same line with live demonstrations by Matthias Rath and young rider Jill de Ridder. In groups of three the judges scored the movements shows for a Short Grand Prix and entire Grand Prix test.

Attending German journalist Kim Kreling told Eurodressage that "the discussions about the marks were very open and they were really talking about details, such as "how many strides before a pirouette is the rider allowed to use as preparation for the pirouette?", "when exactly is a rider allowed to change the direction of the head of the horse in a zig zag?", "when do you punish faults in the movement itself and when in the movement as well as in the marks at the end?", "Why do we have the most disparate marks in the rein back?"

The seminar was attended by a few well known trainer such as as German National Coaches Schmezer, Hilberath and Koschel as well as some riders of the teams. They openly talked about their marks and the discussion with the judges happened in a friendly atmosphere.

The new Grand Prix Special test designed for the 2012 Olympic Games was revealed at this two-day event. Matthias Rath rode the test as demonstration and there was a general consensus between judges, riders and trainers that the test was no good. "We don't want that Special,  not even for the Olympics" was the outcry.

Trainer Jurgen Koschel said that "our current Special is really good for the horses. Most horses get more points in the Special than in the Grand Prix because it is really liked by the horses."  The gathered attendees urged Christoph Hess, as representative of the German FN, to ask the Federation to write a letter to the FEI Dressage Committee in which they reject this new, shorter Special test.

The evening before the seminar several riders, trainers and German I-judges met for an interesting talk on the subjects to be presented during the event as well as the on the Judging Supervisory Panel. They decided that they want to install a rotational system for judges at special shows in Germany as well as instate a national QM-system, similar to the JSP.

"The discussions at the seminar were extremely valuable," said seminar director Dieter Schüle and Hans-Peter Schmitz. "We gathered with experienced colleagues who discussed at a high, knowledgable level."

The two-day seminar was a huge leap forwards in the improvement of the communication between judges, riders and trainers. "It was an important step for a strong dressage sport and strong leadership for judging in Germany," Kreling added.