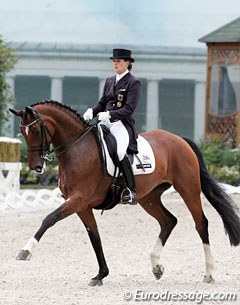 The bay Rom was bred by Wilhelm Tamm and owned by Gisela Makosch. She came to Koppelmann's stable as a three year old and was trained to Grand Prix level by Carola. The temperamental mare was a handful as a youngster, but her rider persevered and ended up on the German Grand Prix B-team in 2010. They were counted amongst the rising stars of Germany.

In 2006 Carola and Rom competed at the Bundeschampionate  in Warendorf and finished 15th in the Finals. In 2008 and 2009 they were finalists in the Median Cup show circuit. In the summer of 2009 Koppelmann started competing Rom in the big tour. In 2010 the pair showed at 's Hertogenbosch, Wiesbaden, Leipzig, Aachen, Mannheim