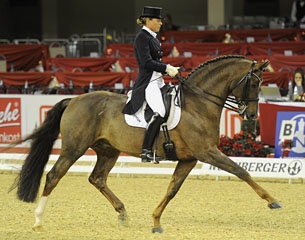 Kathrin Meyer zu Strohen and Detlef Ruddat's 7-year old Hessian branded stallion Rassolini became the winners of the 2010 Nurnberger Burgpokal Finals at the CDI-W Frankfurt in Germany. The Hoya based dressage rider steered the beautiful liver chestnut stallion to a staggering score of 74.850 % in the Prix St Georges Special Finals on Saturday 18 December 2010.

"I was already extremely pleased that we were able to qualify for the Finals," said the modest winner. "Let's drive to Frankfurt and see how it goes" was her modus operandi.

Meyer zu Strohen obtained her entry ticket for the Nurnberger Burgpokal Finals by winning the qualifier in Neustadt/Dosse. At the Burgpokal Finals in Frankfurt, the pair immediately made their mark by also topping the leaderboard in the the warm up class, the Prix St Georges, with 73.053%

Rassolini is not a new comer to the show scene. The drop dead gorgeous stallion already participated in the 2008 World Young Horse Championships in Verden and the Bundeschampionate Finals in Warendorf. 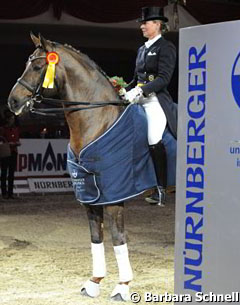 Matthias Alexander Rath and the PSI horse Wells Fargo (by Welser x Fabriano) became the reserve champions in the 2010 Nurnberger Bugpokal Finals. Rath scored 72.750 % aboard his 7-year old chestnut Hanoverian, which he has been riding for a year now.

The Switzerland based Jasmine Sanche-Burger saddled the Dutch warmblood Unee (by Gribaldi x Dageraad) and stayed on Rath's heels with her 72.350 % score and third place. "I used to come to Frankfurt just to watch the Burgpokal Finals because it's such an interesting class with many good horses," said Sanche-Burger, who now rejoiced in her podium place. The 9-year old Unee is owned by Swiss O-judge Beatrice Burchler-Keller and was a premium stallion at the South German stallion licensing. He also competed at the World Young Horse Championships.