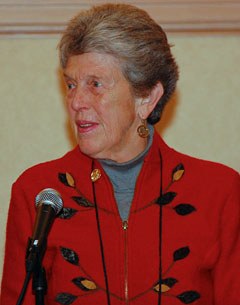 The United States Dressage Federation (USDF) announced the results of the Executive Board elections that were held at the 2010 USDF Convention in Jacksonville, Florida. Elections were held for USDF Vice-President

Officers and Regional Directors of the USDF Executive Board serve a three year term, starting the first day of January after the election.

Beth Jenkins, of Boston, Massachusetts, is the new USDF Vice-President. Intrigued by its "artsy precision", Beth became a dressage enthusiast forty years ago. She has worked with the likes of Karl Mikolka and Sally Swift, and participated in Instructors Clinics with Anders Lindgren.  Over time, Beth started teaching lessons and clinics, became a USEF "r" judge , and then upgraded to "R" and judged an additional 18 years. Previously a computer professional, Beth used her skills to create the computer systems running today behind New England Dressage Association's activities. Beth has also been involved in show management since 1982 and has managed NEDA's Fall Festival. Beth is the author of the original USDF Show Biz.

Janine Malone, of Zebulon, North Carolina, was reelected as USDF Secretary. In addition to serving USDF as Secretary, Janine has been Region 1 Director (1996-2001), an active member on numerous USDF committees, and chair of USDF's National Championships Ad-Hoc Committee and Competition Ratings and Standards Working Group.  She is currently the USEF Vice-President for FEI Affiliates. A graduate "A" Pony Clubber, Janine has volunteered in various capacities for the US Pony Clubs, including Regional Supervisor and National Examiner. She is a USEF "R" Dressage judge, an "r" DSHB judge, an "R" Dressage TD and an FEI Chief Steward for Dressage. Janine owns and manages a breeding farm, and has recently formed a new show management company, Rosinburg Events LLC.

Lisa Schmidt, of Hampton, New Jersey, is the new Region 1 Director. During her dressage career, Lisa has trained several horses to FEI and has earned her USDF Bronze, Silver, and Gold medals. Some of the teachers Lisa has worked with include Hilda Gurney, Scott Hassler, Ashley Holzer, Betsy Steiner, and Steffen Peters. Lisa eventually established her own training business in New Jersey, at which time she entered the L Program and became a licensed judge. She is currently an "R" judge and was recently accepted into the S program. Lisa has previously served as a USDF PM delegate, GMO delegate, and as chair of the USDF Competitors Council.

Kimberly (Kimmie) Taylor, of Youngstown, Florida, is the new Region 3 Director. Previously an owner and operator of a business in Europe, Kimmie has strong management, business and leadership skills. She plans to use these skills to grow membership in the region, as well as to support GMOs.  Kimmie has served as Vice-President of her chapter in her local GMO and is a dedicated GMO volunteer. She is a USDF Associate Instructor that has shown competitively in two different regions, taking lessons on both sides of the Atlantic.

Heather Petersen, of Peyton, Colorado, has been elected to serve as the Region 5 Director. Heather is an active dressage competitor and a USEF "r" Technical Delegate. She has served on the USDF Competition Management Committee, Peer to Peer Council and Awards Committee, in addition to being secretary at several USDF Regional Championships. She is the past President of the Rocky Mountain Dressage Society. Heather has organized USDF "L" Programs, a USEF "r" Dressage Judge Program, as well as several educational symposiums.

Terry Wilson, of Ojai, California, has been reelected as USDF's Region 7 Director.  Terry is a high school teacher, where she has also served as Equestrian Director for the past 26 years. She has great interest in the Junior and Young Rider programs, as they represent the future of dressage. While education is her primary concern, Terry has a strong interest in the work of the USDF Sport Horse Committee as she is a breeder of Dutch Warmbloods. Terry has a great deal of experience as a show manager and volunteer. She frequently works with the California Dressage Society Executive Board in some capacity.

Bess Reineman, of Lovelady, Texas, has been elected to another term as Region 9 Director. Since getting involved in dressage in college, Bess has earned her USDF Qualified Rider, Bronze and Silver medal, and became a USDF "L" graduate. She has ridden with several high performance riders. Previously a competitor, Bess is now more active in volunteering, giving clinics, and judging schooling shows. She has achieved a number USDF All Breed, GMO, and Regional Awards. She is an active member of the USDF Membership Ad-Hoc Committee, USDF Management Committee, USDF Investment Committee, and USDF Web site Advisory Working Group.