Keeping the Holsteiner Horse Up to Standard 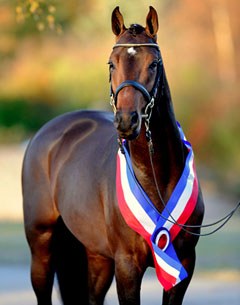 Guest Columnist of the week is Wendy Webster,  an active breeder of Holsteiner horses near San Francisco. She stands the black licensed stallion Hunter, by Heraldik xx. Wendy moved to California in 1974 and into a financial services career

that spanned nearly thirty years. She started her Holsteiner breeding project "W2 Holsteiners" in 1992. She was a member of the Board of Directors of the American Holsteiner Society between 1996 and 2000. The United States Equestrian Federation honoured Wendy with the 2005 USEF/ PHR Leading Breeder Award for Eventing Horses for her product Le Samurai (by Sabotage x Helali xx). She was also a recipient of the  AHHA President’s Award.

Keeping the Holsteiner Horse Up to Standard

The legendary horse Pegasus surely must have been a Holsteiner for no other breed of horse can give a rider that lighter than air sensation of flying like the majestic and proud horse from "between the seas".  Whether you aspire to floating through a dressage  test as effortlessly as a ballerina, tackling a gruelling cross country course with the  agility of a deer or leaping obstacles of dramatic proportions in a show jumping venue the Holsteiner will provide the character, substance and extraordinary talent to bring your dreams of flight to fruition.

The modern Holsteiner horse is bred from a recipe with a clear goal but a variety of ingredients to make up the finished product.  Through selective outcrossing and culling of breeding stock over the last 700 years the Holsteiner has developed its characteristic conformation and gaits. A strong hind end and sturdy foundation with looseness through  the back and shoulder give the horse power and agility making it the Ferrari of the  sport horse world.  Ancestors of today's Holsteiner humbly pulled the farm equipment in deep soil and inclement weather which over generations of breeding created a horse with a "turbo boost" in the hind end.  This benefits today's rider by providing extra lift over the highest jumps, substantial carrying power and push for upper level dressage move- ments and an agility for negotiating cross country obstacles at speed over rough terrain.  The farmers could not afford the luxury of resting their horses once the spring thaw allowed the ground to be tilled.  Horses who had done little work all winter were harnessed up and those that were lacking in energy and spirit were also culled.  Today's Holsteiner comes from generations of willing workers and he will give his all when asked to perform.

Observing the Holsteiner in the stable one is immediately drawn to his intelligent and noble expression.  While taking in his surroundings with large quiet eyes his alert ears are tuned to all activity and he will not miss the opportunity to zero in on a favorite friend, human or animal.  Holsteiners are sensitive and will develop strong bonds with  humans who treat them with consideration, respect and good horsemanship.  This manifests itself at the highest levels of competition where Holsteiners repeatedly occupy the winners circles.  No exception was the 2008 Olympic Games where Holsteiners were in evidence as gold medalists in 3-Day Eventing and Jumping and the 2010 WEG where Holsteiners again acheived gold medal status in the Team Jumping Competition and silver in Team Dressage..

The Holsteiner breeding association remains steadfastly devoted to one solitary  objective - to dominate the sport of International Show Jumping.  To this end they have achieved their goal in 2010 by placing second in the WBFSH rankings for show jumping.  While the breeders are happy to celebrate the accomplishments of their horses in other disciplines they believe that maintaining the focus strictly on jumpers is the best way for their relatively small breeding program to be successful.  After all there are plenty of other registries already breeding horses for dressage!  While it is possible to find farms throughout Germany who include Holsteiner genetics in their dressage breeding programs the appearance of superstar Holsteiners in the international dressage scene is relatively rare.  At the 2000 Olympics held in Sydney the Holsteiner gelding Chacomo was a member of the German Gold Medal Team and the brilliant stallion Silvano was a member of the Silver Medal winning Dutch Team. One would have thought with this success the Holsteiner would have made further inroads into the dressage competiton world by now.  Sadly, that does not seem to be the case.

Now the biggest challenge for the Holsteiner remains diversification of its genetics which are largely based on the three sires Landgraf, Capitol and Cor de la Bryere who all achieved dynasties beginning some 40 years ago.  To remain on top in the competitive show jumping environment (similar to providing cars for the top level of grand prix racing) breeders strive for a horse that is quicker over the ground with good handling to negotiate the demanding courses of top level sport.  Adding just the right Thoroughbred blood to the existing mare base will hopefully keep the Holsteiner in its preeminent position competitively but who is the "right Thoroughbred"?  This has become the haunting question. The use of the Thoroughbred Ladykiller propelled the breed on its current course as a  modern sport athlete beginning 45 years ago and replicating his success would be a dream come true for any horse breeding association.

by Wendy Webster for Eurodressage