Holzer Makes it Three In a Row, Rocking Out Dressage Night at 2010 CDI Toronto 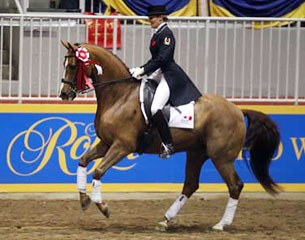 Thursday was dressage night at The Royal Horse Show and it was truly a night to remember. Five top lady riders performed as a crowd of enthusiastic fans showed us that the “Kur” or Freestyle to Music is still their favourite.

There were performances set to classical, jazz, and even Latin music, but it was Ashley Holzer that took the risk on a performance that started with Black Eyed Peas “I Gotta Feeling.”

“My daughter came up with the idea to do something fun,” said Holzer when referencing the upbeat and contemporary accompaniment developed in partnership with the 13-year-old. “I thought it was a good idea for something new to do.”

Apparently the judges agreed. Finishing with a score of 75.150, almost 4 points above the next competitor, it was agreed that her gamble paid off. This is the third year in a row that Holzer has topped this class with her partner Pop Art. Jacqueline Brooks took second with her long-time Royal partner Gran Gesto, and Victoria Winter took third with Proton.

“Overall it was a very nice test,” said Head of the Ground Jury, Mercedes Campdera, of Mexico. “It was very correct and very harmonious, and that is something you want to see. You want the musicality but you never want to forget the technical part. That’s really important. I gave her 8’s for her tempi changes, they were very well ridden. Today she had a big improvement. But I really, really liked her piaffes – they were the highlight. It was fun.”

When asked why she chose to come to The Royal with her horse Pop Art, so soon after the 2010 Alltech FEI World Equestrian Games, Holtzer remarked on her enjoyment of showing in front of her home crowd, but more than anything, to once again receive the Nicoll Award, a tribute to her belated father.