Hogberg Nominated for 2010 Comet of the Year Award 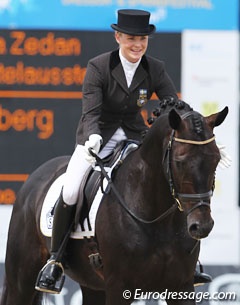 Swedish dressage rider Jeanna Hogberg has been nominated for the 2010 Comet of the Year Award, a special prize giving to the Swedish shooting star of the year at the Swedish Riders' Gala.

Hogberg's nomination is based on her successful break through at Grand Prix level with two horses at the same time which she trained from novice to Grand Prix level herself. The 28-year old Hogberg rides her two mares, 13-year old Kataleis Will (by Cortez x Libretto) and 12-year old Liza Minnelli (by Cortez x Ganesco) at the highest level.

Hogberg was challenged this year as her most mature Grand Prix horse got injured during transport so Jeanne was forced to focus more on the younger one.

Hogberg competed the 5-year old Wellington (by Weltman x Campari) at the 2010 World Young Horse Championships in Verden and qualified four youngsters for this year's Swedish Sport and Breeding Championships. The ambitious rider showed great sportmanship by elping an injured colleague in getting qualified.

Jeanne is praised for her textbook riding style and and beautiful seat.